I’ve been making a wood gasifier for small engines based on Joni’s. Should be good for 300-700cc engines. I tried to run it yesterday. Not very successful. It sort of surges. It produces good gas for a minute or so, then the flare goes out then brown tarry gas, and repeat. I think I need to do more to get water out of it, so hopper tubes. I collected about a teaspoon full of condensate. LOL And it bridged so I have to cut the wood smaller.
Specs: 9" diameter, .400" nozzle (just a steel washer), 1.56" restriction, 4" nozzle to restriction, the restriction is a silicone carbide grinding wheel I cut the center out of with a cheap Chinese diamond hole saw. I thought this would last a really long time and hold a lot of heat.
Rindert 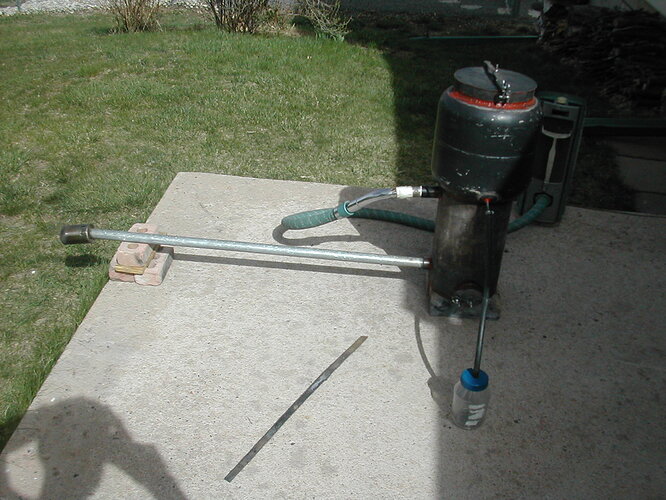 Good. Good.
I am happy someone still pursues raw wood for small engines.
Can you please picture up your wood chunks you are using? Please.
Best Regards
Steve unruh

Its doing that because the fuel in the hearth is burning out and new fuel coming in replacing that fuel is not processing fast enough to where it needs to be at those stages of process. Basically your fuel flow is not consistent and more than likely will need an aggressive hopper agitator.

I believe Joni used heavy chips in his mini gasifier. In his flare test he also used a pusher blower.

In mine that I made I do a rocket fuel mix just to be safe, but I don’t have a monorator to speak of so I use the charcoal to absorb the water.

Sounds to me like a bridging issue.
I will assume you tried smaller fuel ( blocks around 1 inch seem best for tiny units ), so try this…
Run a steel rod from the small engine to the gasifier to add some vibration.

You maybe want to use a bigger fuel hopper too.
Small hoppers sometimes heat up and start to cook the raw wood.
This makes bridging worse because the fuel gets sticky.

I would also try blocks, if you saw cut them, cut them at an angle like SteveU has prescribed so the blocks have some breathing room and keep them from sticking to each other with tar or bridging.

Can you please picture up your wood chunks you are using?

Maybe i missed something but can you post an image of your angle cut blocks ?

Edit: Also if Rindert followed Joni’s design to a T like I did, he has a welded fixed grate to the reduction. Wouldn’t shaking just keep compressing the char bed?

It might compress a little but the vibration is more than likely going reduce the fuel bridging issues.

I am not familiar with Joni’s design.

Chips are a real difficult thing in small machines, big machines also have bridging issues with them.
Small blocks however under 1 inch seem to flow nicely in everything.
Bigger machines might work better with bigger blocks however.
it all depends on the hearth size and air velocity to find the best size blocks.

I have easy access to softwood chips.
Its my opinion they do not gassify well…

Looking at my hopper on my Mini Joni, I might remove that and replace it with my old steel milk can. Can’t think of any time I’ll need more than 10 gallons of hopper in one go. Save the big 25 gallon hopper I made for a different build.

if Rindert followed Joni’s design to a T like I did, he has a welded fixed grate to the reduction. Wouldn’t shaking just keep compressing the char bed?

I didn’t follow Joni in every detail. I made a grate out of angle, so ash fills little troughs and protects the metal from very high temperatures somewhat. I drilled the holes for the bolts that hold it in place 1/8" oversize so it can rattle just a little. Here’s a top view that I used to lay it out. 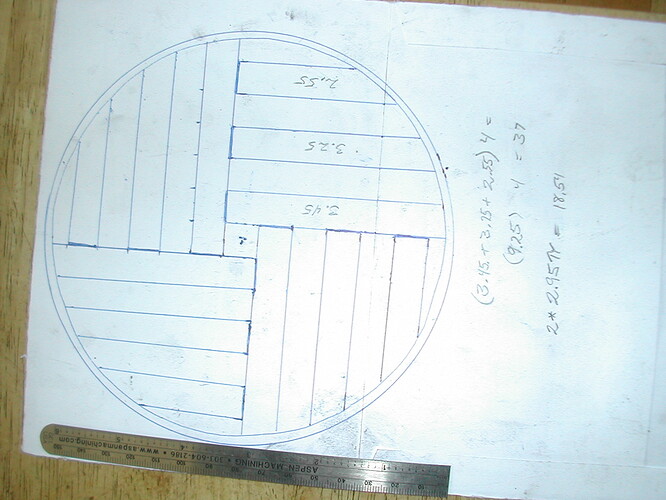 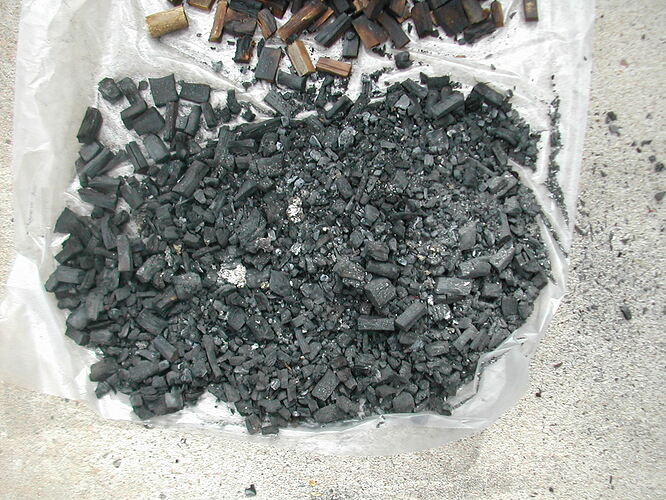 DSCN34151600×1200 378 KB
Now I’m making hopper tubes and a tar still. The still will drip the tar into the reaction zone. I’m hoping that removing water will allow me to run a 275 cc engine generator that I have without resorting to charcoal. 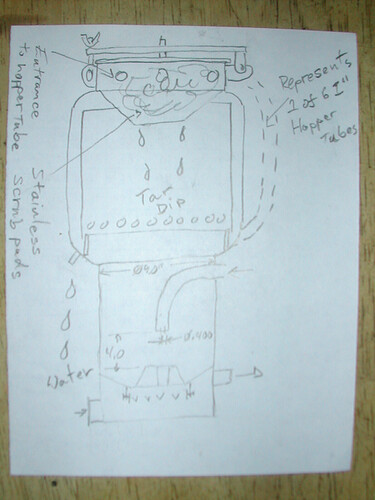 Did you make an inverted V ash cone to make your reduction zone? I just used some 6" pipe and welded 2 small bearing races for my restriction to build some ash.

I still need to add a cooler and filter to mine before I fully test it. Might add 3 circumferential nozzles in a much much smaller nozzle tip size since I used a 12" propane tank for my gasifier body, and keep the central nozzle to prevent a cold spot in the center.

Mine is scaled up ever so slightly but I hope I can run a 400cc engine.

The closest he got to recommending a single air-in was the system with a drop down single fed internal nozzle ring.

Single central air’s have been claimed to work on raw woods: The Australian Kurt Johanson (sp) and a couple of others guys. But only on bigger than 275cc, high flow drawing multi-cylinder engines.

Convert what you have to the drop down at least five jets internal peripheral air ring.
You want the oxidization heats sources out near the outer; will be colder, edges. The made wood volatiles mists and gasses then will not be outer walls cooled, but force thru the center hot hell lobe.

This is what we keep referring to

this gasifier is designed for an engine of 100-500 cubic centimeters, works on wood chips and sawdust. This is my work and it is built according to the old documents of the engineer Rybnikov and it works wel [Тест-драйв газгена "Рыбникова" на дровах скоростного типу...] 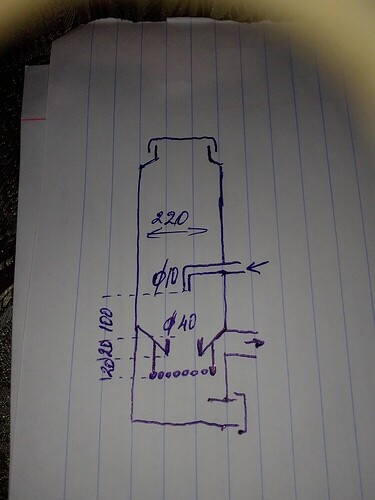 Edit: I do have a nozzle tip prepared to make it central air but have 4 small jets parallel to the ground and one pointing down into the restriction.

O.K. Yeah.
And how is this in any way related to Joni’s shown video except having that single central air nozzle??

Point 1) he shows in the diagram and video a tall narrow in proportioned tube gasifier.
Rindert you have made a larger diameter; larger volume hopper gasifier. Making for a larger volume wood cooker chamber.

Point 2) look at the heat rust on his outer tube housing. That smaller diameter surface gets HOT, HOT able to hot char convert wood volatiles. You will never be able to generate this outer heat only pulled by a 275cc engine, Rindert. Certainly not generate the heat energy to convert your much larger volume of raw wood volitals cooked out.

Fellows. Details matters.
So not a Joni at all. His shown pathway was not followed.
A Rindert in development.
Steve unruh

A Rindert in development.

Anyhoo, The way I see it first you make a burning charcoal hell, then you feed air, tar and maybe a little water thru it, while keeping the char at a temp where it can do it’s work. I was watching this it with one of those non contact, pistol grip thermometer. the shell outside the reaction zone seemed to run ~350F. To me that says there is a lot of potential to save thermal energy by insulating.
Of course when I over pulled it the whole lower part, ash door, gas outlet nozzle and everything got up to 800-825F. Don’t tell my wife. LOL So now I have some notion of what actually happens when you over pull.
At a gut level, you don’t learn without doing.
Rindert

Did you make an inverted V ash cone to make your reduction zone?

That was the original idea. But in the real world I haven’t figured out how to make a cone shaped hole in silicon carbide. So this is what I could actually do.
Rindert The grinding wheel restriction is crumbling. This isn’t the same material foundry crucibles are made of. Maybe just the binder that holds the silicone carbide grit together isn’t able to stand up to the temperatures found in gasifiers.
Rindert 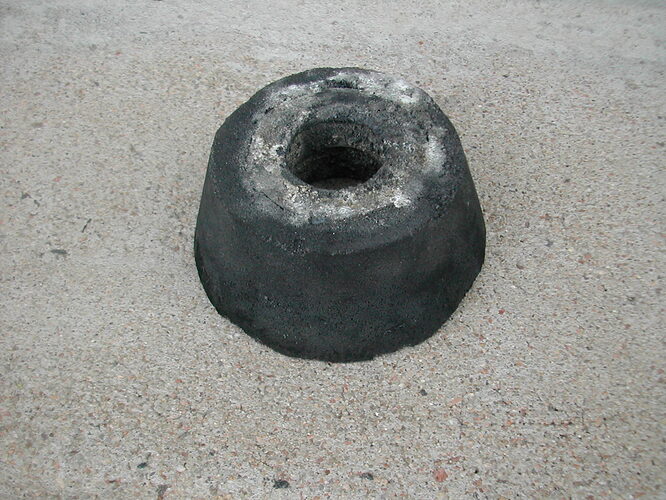 Rindert I would maybe look for an old golf cart wheel. You can use it as a combination restriction and reduction, the center hole is usually 3" but you could always put a plate over it.

Hmmm, What is it made of?
I would think something with large thermal mass, high melting point and high corrosion resistance. I think I’ll try furnace refractory next. A tungsten carbide nozzle was reported on this site and apparently worked. I’m going to keep the grinding wheel in there for now, and make a tar and water still.
Rindert