What kind of filter media?

Probably a dumb question, but what kind of hay or straw is good for the filter? I have near me a source of oat straw. Is that a good choice? Also alfalfa hay or mixed hay seems common around here.
Going another direction, what are the qualities of hay that make it good for a filter. I’m thinking of other filter materials that might work good like plastic or something.

I hope that wasn’t a dumb question because I asked it too before! I started out with fine grass hay but that packed when it got damp and had too much pressure drop. Leafy alfalfa might have the same problem. I now use wheat straw with no problems.
(popped corn worked ok in my charcoal lawn tractor filter too)

I use a poor quality hay very much like wheat straw . If you use fine or better quality hay you may not have to use as much but have to change it more often when it get packed down .

I think pine straw would work just as well.

Hi Wayne,
What is pine straw? We have pine trees up here and they drop long pine needles, I think it because of the dryer climate on the east side of the mountains. Thanks
Bob

I was reading the UN document from the FAO and they talk a lot about filters too.
Fiberglass comes up.
Could you use the same kind of glass mat used on boats as a filter element?
Maybe use this as a layer between hay and felt.

Wool felt is said to be a good medium too.
This leaves cotton.

So hay as a pre filter and what as a fine filter?
I too would like to hear more about the kinds of hay and straw best suited for filtering gas.

What could you use a a bag house style sock?
Could yo use a real wool sock??

What is pine straw? We have pine trees up here and they drop long pine needles,

Ok good, My original question was two fold. For right now, what kind of hay or straw? Wayne has always said course stringy hay. Oddly enough the craigslist postings don’t offer course stringy hay. So I wondered What kind of straw or hay is course and stringy. Oat Straw or wheat straw or something else? What kind of hay is course and stringy, alfalfa, timothy, grass hay?
So I have an answer to that.
The second part of the question for later, I didn’t really enunciate very clearly, but it was what type of filter media could be used instead of hay? Are we counting on the absorbtive qualities or simply the surface area to collect the soot and moisture. Still need more suggestions on that. I’ve seen condensers using short bits of metal tube to fill a drum and all the surface area and turbulence caused collected the moisture. I was thinking something like plastic from bottles etc cut into curlique ribbons stuffed into the filter drum. Advantage is it wouldn’t rot even with prolonged dis use. also could be washed easily. pretty much used forever rather than changing every few thousand miles.
Now regarding pine needles, I believe Pepe used them in his small engine gasifier. the pine needles in my yard are short, About 3". It seems to me they would pack down and not allow free flow.
End Of Ramble.

Yes pine needles from a pine tree . I think at many home improvement supply houses they sell hay bales or pine straw bales for landscaping and erosion control.

I think any type of straw would be OK . I would stay away from alfalfa and timothy because of price and also the alfalfa is kinda leafy. Just grass hay will do OK.

I think what we are looking for is a media with plenty of surface area that will still let the air pass through easily.

In the past I have experimented with a lot of filter media. Old cloth and rags , open cell foam ect.

I have used very small wood blocks( 1/2 x 1/2 ) , wood savings and charcoal but the best I have found is hay. When the hay filter is changed I can leave it lay a few days to dry and burn it , put it in the garden for compost and biochar ( charcoal dust ) or if left in the open certain times of the year the cows will eat it.

It takes less than five ponds of hay for the filter . My 800 pound rolls of hay are worth about 40 bucks which makes the hay very economical for my use .

Another thing to consider is how easily the media can be changed, I think I have some videos somewhere I will try to pull up but in the meantime here is a video from one of my heros . 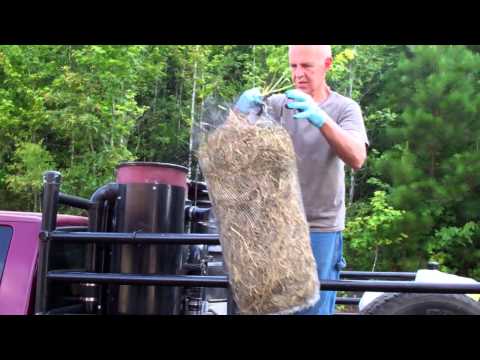 Wish yall were closer . I could load you down with hay for a filter media . 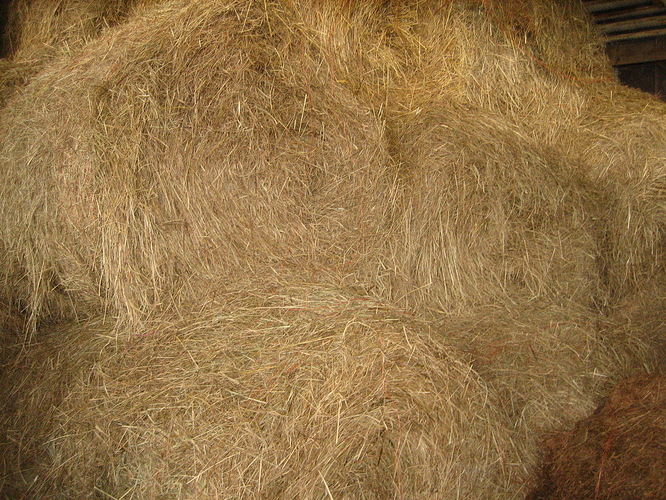 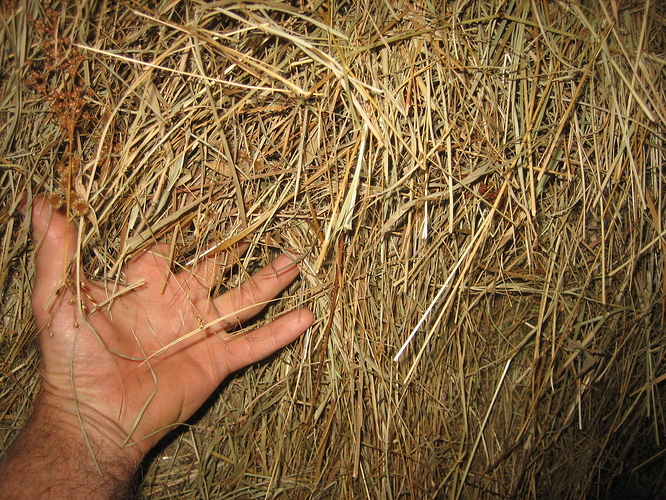 Filter media right out of the field .

The last week I have been tied up in the hay fields trying to make hay while the weather is right. I haven’t been on the road much but still averaging about 50 miles per day running here and there. 1st pic Good time to add to the hay filter because there is several ton available. #2 Hay ready to be pushed down in the filter housing. #3 Hay in filter. #4 Hay in filter with screen. #5 At the stream for water to wash the hay. [image] [image…

Wallace, I use a cotton sock from Walmart for course. I need to try wool. Seasoned socks works best. For final filter I use a water filter.

Thanks for all the responses. the cost of hay is not an issue. I can buy the small square bales for $3 -$5 . I think I may have trouble getting the sellers to even fool with me for one lousy bale. As far as substitutes go, I guess I’m just trying to re- invent the wheel as usual.

Maybe Cotton socks to make sure no hay finds its way past.

But Wayne has sold me on straw.
Or hay grass or what ever that long green stuff is technically called from wild grass.

Wayne:
Any further processing tricks for hay we should be aware of ? ( I just watched the video and really like you bag idea ).
Thats slick and fast.
Environmentally friendly too.

I was looking at these big Donaldson filters at work.
They are replaced with every service and about he size of you hay filter.
I bet they have enough life left to be of use, trouble is they are big dirt non biodegradable things.
I don’t need that extra clutter in my life.

Carl was the one to turn me on to the laundry bags. They work great.

My wife bought me a bale of straw to try. I like the texture better, and it is in the truck now. 800+ round trip miles to Belton, and it is starting to show about 10" H2o at full throttle, but drops back to less than 5" H2o at cruising speed. I will try washing it soon. I never had much luck washing the hay available to me. I think a change every 1000 miles is not an issue for me. The “hay filter” was the original great idea Wayne.

I wonder what would happen if you got your hands of some raw flax.

If you beat the hell out of it and crudely separated the fiber from stalk do you guys think this would make good filter media?

I am not a farmer but I understand he is bundling, soaking and rotting the chaff from the fiber to make breaking it up easier.
His accent is from the rural south part of the UK and he’s hard to understand. 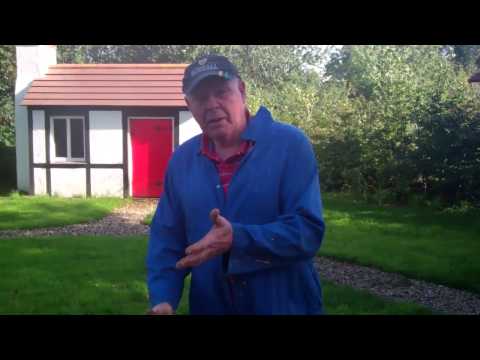 What a strange accent, never heard anything like it!

Top of the day to you

Hi guys, in my time of driving the WoodPoweredCaddy I tried different kinds of hay, I changed hay three times in the 7,000 miles I drove it. I remember somebody posting that “brome hay” worked good so I used that the first go around and I thought it worked pretty good. Next time I used some other kind that was mostly stems, I didn’t think it worked very good, seemed to me the woodgas just went around it! Out of what I tried I liked “pompous grass” the best, it’s a wide leaf 12-15 inches long on top of a stem, just used the leafy part, it grows wild in the ditches around here! I think the wider the leaf the better it is for what we are using it for, good topic!! Herb

couldn’t get my hands on any hay or straw for a period of time so I ended up trying rolls of burlap used for wrapping shrubs in the fall to protect them from winter winds/cold.

I used 2, 3x25f rolls of burlap to fill the 45gallon barrel i use as a filter. seems to work quite good. I find it alot easier to change out than hay also I can ensure that the filter material is tight against the sides of the barrel. I tried the hay in the bag trick but had issues of the gas bypassing the main mass of the filter and flowing up around the edges where resistance was least.

this may be a good alternative for those city dwellers that don’t have access to agricultural goods or need some filter material in a pinch, you can get this stuff year round a home building centres.

Been using the same burlap for roughly a year now and holding up well. has just been turned black from the soot but no signs of degradation of the fabric and remains quite “free flowing” due to the large pores that are manufactured into the material. haven’t tried to wash it yet but black soot comes off when touching the burlap so assume that this is also a likely possibility as well.

Biggest downfall with this material is it freezes up in the winter, however hay and all other materials due this. The warm woodgas will heat things and melt the ice in the filter however this does take a bite to do and depends on the ambient temperature so I find that when we get into 0 Fahrenheit I run without any filter material except for some courser metal screens or there is too much restriction from the filter (due to ice bulidup) and I have idle problems.

the other option would be bypassing cooling rails to dump warmer air into the hay filter thereby warming the filter material faster. This may be one of my projects for summer

running without a large filter mass does give more soot up to the throttle body however this can be cleaned in the spring/summer and is payment for having a consistent idle no matter what temperature or how long the gasifer has been driven. 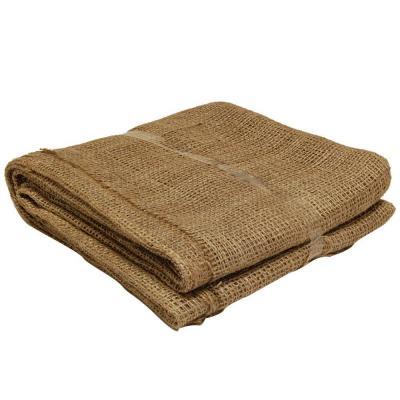