Marcus was talking about going fishing and gas cost. Boats that DOW. I have been thinking about this for a while now, like about 4 years to be honest. My boat is a 2 cycle 60 hp. Evenrude top speed 30 mph. Fuel mileage poor. I do run on my electric trolling motor when fishing. Buttrolling is done on the 60 hp.
Now if I took a old boat with a Mercruser 6 cycinder 140 hp. and gasified it I would still have about 100 hp. to move the boat down the lake. Fuel cost now $0.00. 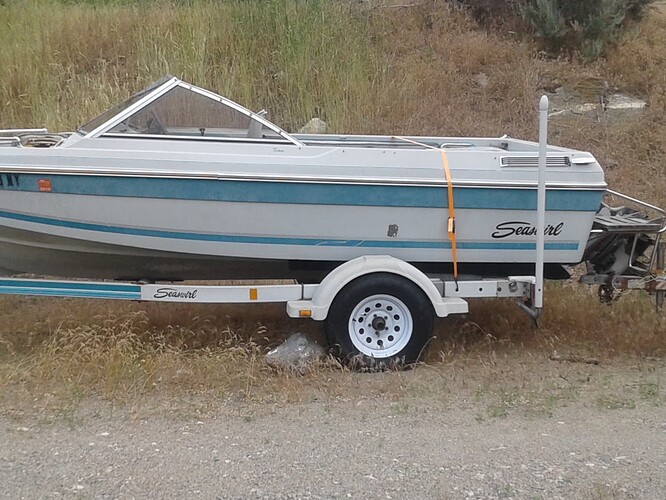 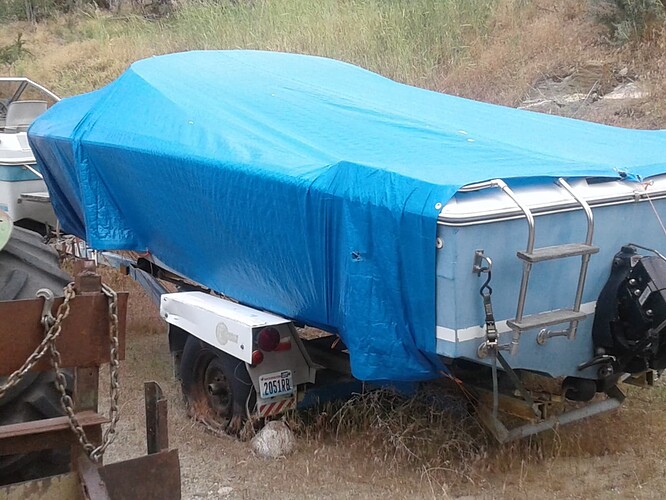 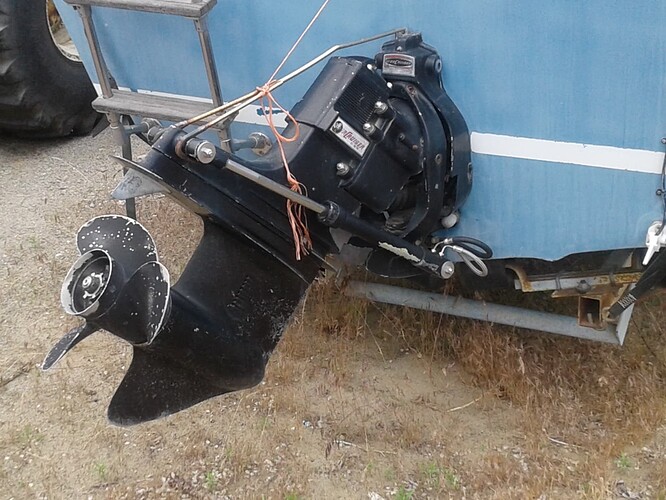 IMHO, I know a lot about boats as I am a certified boat mechanic (or used to be anyway). I personally don’t think anything based on fire is a good idea for a small boat. There is just too much that can go wrong and can cause a life threatening situation. Now if you’re building a big steel tanker sized craft, then maybe. 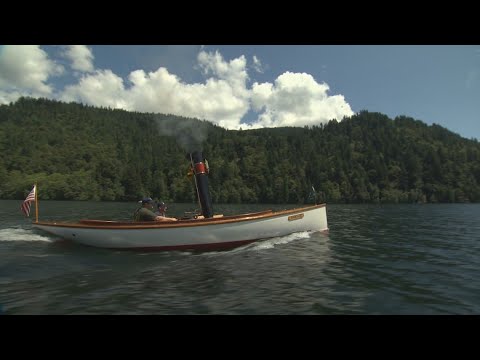 I think that if Goran can strap a gasifier on his moped then you can surely gasify a boat. If you are going to catch on fire then I’d kind of prefer being out on the water. Maybe a hundred horsepower is a bit extreme,

If I had a larger vessel, I would be very very tempted to run it on charcoal. Something of inboard, 4cylinder proportions. Small basic system, and good fire suppression on board which I always have anyway. Only problem? I prefer an outboard tiller! And there aren’t many of those in a 4 stroke variety that I could afford. Temptation though…I have been on the hunt for a older 4 stroke 15hp Honda. I don’t think the wife would appreciate it, but it would be a built to have set to the side for a shtf scenario. As it is now my 8hp 2stroke mariner moves me around fine the few times I get out on the big lake. I would like maybe a 20’ vessel, open hull aluminum, console control with outboard big Honda 150 to cruise the big reservoirs of the east side. But for now I’ll settle for a little 2 stroke smoke and a free of fuel charge tow rig to get it there

Yes it seems ifey but there is water avaliable. Driving down the road seem to be more of a problem to me. I have used heaters, and BBQ, on a boat. If you have a engine fire and can’t put it out. You are going to have to go overboard for sure.
I was thinking it would be hanging over the back of the boat transom above the out drive and the water. Always have the engine blowers going when starting up.
The African Queen boat, with Humphrey Bogart and Katherine Hepburn a wooden boat using gasification or steam?
Bob

Hi Bob, don’t hesitate… just do it…
The surrounding water makes it safer and easier to cool the gas before going to the engine…
Even the 2 stroke would run as a dream…
With the water to cool , it is easy to get the tar out of raw wood as well

@SkyForum, There is no pressure involved no spare fuel to burn other than the small amount char or wood…

I have 3 boats rotting away in my storage yard, all need engine work. Willing to part with them for cheap or even zero dollars.

As Koen sayd, do it!

I wuld utilise the fact you have a unlimited supply of water near the gasifier so l wuld definitly use it for cooling, maybee even filtration. That way the sistem wuld end up super small and compact and the gas wery cool

Also, if water scrubbed, you will be able to use the original 2 stroke. I have found they like woodgas. All you need to do is take the engine head off and grind it off a few mm to boost the compression ratio up to about 12:1 and the engine will run wery well on woodgas.

I have a Simple Fire that uses a refractory liner around the fire tube and an insulated flue section from a wood stove. No part of it ever gets over a hundred and twenty degrees F. It probably weighs a hundred pounds empty. I’ve been wondering about how the wood gas two stroke gets it’s lubrication. I have a thirty year old, thirty five HP Evinrude boat engine I’d be willing to try it on.

You just use a needle valve and manually drip oil into the intake runner. Just like the olden days of Total Loss Oiling, the Harley and Indian days before Oil Rings were even an idea.

I’ve thought about this for years too. My thought was to use a pontoon. Then the gasifier can be secured to the deck.
My question is, if it’s a 2 cycle with a separate oil tank for injection, would that work?

I think that would work, since oil injection is mechanically controlled right? Or is it pulse powered? Either way should work I think.

I say go for it…like others said above…unlimited water for cooling gas and scrubbing it. Much smaller simple system. Fire danger is much less than any gasoline boat … Especially outboards…can’t tell you how many of them burn to a Crisp.

One warning though… If your going to use 2 stroke be ok with high probability of loosing engine really fast. I’ve been thinking about 2 strokes and woodgas for weeks now… The gas is what moves around the 2 stroke oil inside engine to where it needs to be… Even with oil injection without gasoline it will just puddle up in case …oil isn’t an aerosol and it will not get to needed places without gasoline or some type of transfer medium… I have a couple 2 stroke oil injected engines and don’t really care about them… I was gonna attemt to do some experiments and figure out how to mix some alcohol into oil and figure out a percentage …I would glue in my bore scope and watch inside engine case and mix alcohol into oil until a good oil spray is achieved … Problem with oil injection is they are already Inheriently leaky system already and may not like the thinner oil. But never know until you try.

Here’s some inspiration for you guy’s, i have a pic of a charcoal powered outboard engine somewhere, ill post that to if i find it. 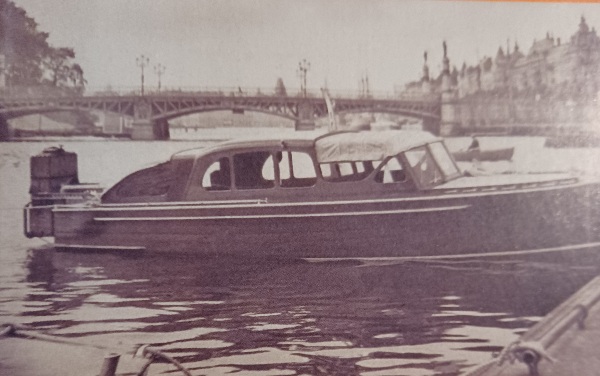 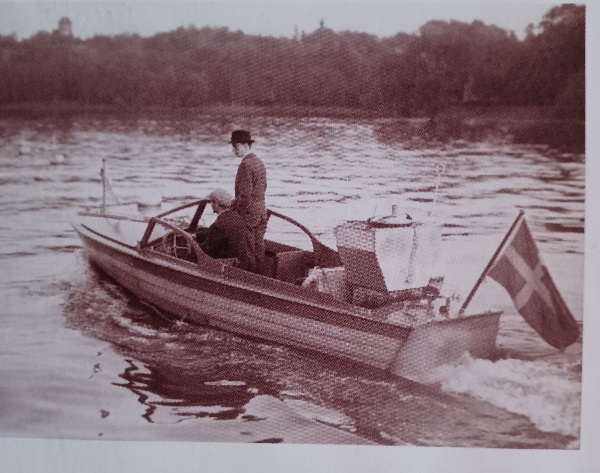 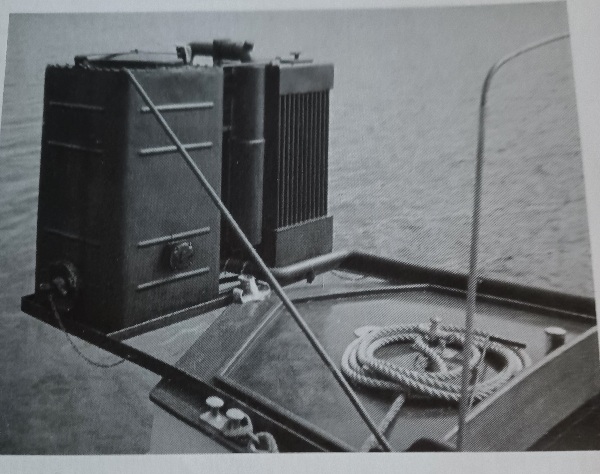 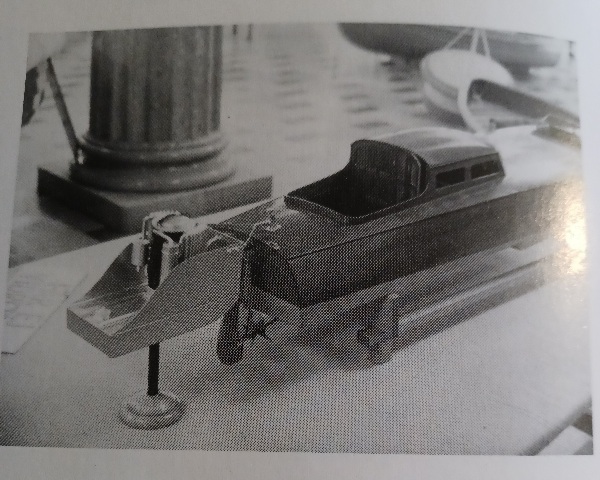 This is just a model, showed at one of the woodgas-exhibitions during the war, i think it’s an interesting idea, probably inspired by Volvo’s popular one-wheel charcoal cart.
As for the oil-injected two-strokes, it’s something i considered when i built my charcoal moped, but it was easier/cheaper to use a four stroke.
In some thread here i posted a pic of an old Saab, 3 cylinder, two-stroke, that was run on charcoal during the fuel-crisis in the 50:s, that one used separate oil injection, should have worked just fine, only very low power, (around 35hp on gasoline),
By the way: seems only charcoal-gas is suitable for two-strokes, (woodgas is slightly corrosive, no good in a aluminum crankcase)
Edit: some warnings, leaking woodgas (from crankcase, or “after-gassing”) is a real danger in a small boat, with nowhere to “escape”. (If weather is calm)

Here is an article about running a two stroke on Alcohol Rob. We were discussing how to run alcohol in a chain saw at the time.

I know how to run alcohol on 2 stroke…my banshee ran on alcohol. What i meant was add alcohol to 2 cycle oil to thin it and arrosol it a bit for woodgas… 2 cycle oil needs the liquid fuel to move oil to needed parts. Just injecting oil will load up case and not move oil… i finally got rid of kids 2 ztroke bikes cause they barely came off idle…without getting on tge throttle and getting on the pipe it was killing wrist pins and pistons… i even added mix to fuel itself and there just wasnt enough fuel and turbulence… i was rebuilding theirs once a year and my banshee had 6 years on it with no repairs other than a clutch…but i got on mine every ride…11k rpm a d 106hp…lol. miss that machine

William.
You are absolutely correct. A fire onboard a small vessel, where there is nowhere to run, and the watercraft is made of extremely flammable materials, (fiberglass resin) is no joke, unless inside an internal combustion engine. Still many fatal accidents. I have seen a watercraft fire play out before my eyes, not a pretty or easily forgotten experience. Fuel cost is a very small part of your total boat ownership budget. You want free fuel? Get a sailboat. That is proven tech! Recall at the end of the African Queen movie, they were all in the water clinging to debris.

Rob, l got mixed feelings about this…

Part of me thinks your statements make sence, the other part does not.

As l understand most modern 2 stroke motorbikes dont use premix any more? They seem to run fine.

You mentioned pudleing of the oil. Well eventualy the crank shaft will kick it around will it not? And it will throw it on the piston, where oil is most needed anyways.

Now l do see where this may be a problem, crankshaft bearing. The first engine l tarred up with woodgas at my begining back when l was a 13 year old dumb boy was full of junk everywhere except the center of the crankshaft. Seems centrufical force pushes everything away. But then again, tar is an aerosol much like oil in the air/gas/oil mix, so it probably behaves the same? In any case, probably why 2 strokes have needle bearings on the connecting rod instead of bushings (or whatever they are called) as 4 strokers usualy do

Wich reminds me, Tone, how is your 2 stroke diesel Holder designed to cope with this?