Still waiting for someone to upload the episode to YouTube , about the only way to see it downunder
Dave

This thing looks great. I’d love to see the show but my wife won’t add 5 bucks a month to our bill for me to see another car show and we don’t have enough data to stream anything.

Hi Tom , i think Chris mentioned he managed to see it by getting a free trial on Discovery+ maybe that’s an option you could try your end .
Dave

Congratulations on the build and thanks for the links and pictures .

Can you tell us if the car is being driven daily and about how many miles it has on it now .

Edit . Can you estimate man hours involved with the build ?.

Dave & Brian,
I don’t know how it would be where you live, but yesterday I signed up for the no-ad version of Discovery+ one week free trial. My viewing speed was good–no buffering, but the picture was so low resolution that everything looked way out of focus because my internet speed is so slow. I use Firefox on the Ubuntu operating system with the “Video-Downloader” add-on and was able to download a high resolution mp4 video file of the show. I am now able to view it any time and as often as I want. Then, I canceled the free trial, so I wouldn’t get charged later. Might sound complicated, but it fits my style–FREE!

Thanks for that Steve i may have to give that a try if i cant find it any other way , i hate having to put credit card details down for a free trial normally .
Not heard of the add on for video capturing on firefox before i may also have to look into that as well .
Thanks for the info
Dave

Actually the Firefox add-on I am using now is called “Video DownloadHelper.” It doesn’t work for me all the time, but worked perfectly on the Discovery+ video. I know what you mean about the credit card info, but i do stick my neck out occasionally. I just want to make sure I can stop it before the trial period ends and they charge me. It appears that my cancellation has registered. In the cancellation email I was informed that I still had the initial one week period of service available to me. I saved that email. I’ll keep an eye on it.

Monster Garage will now be on broadcast!
Get to see my twin and I guide the build team to get this Corvette to breath fire.
Monday August 9th at 10 Pm ET/PT.
No details on exact date when our episode will air yet but I’m excited that it will finally be accessible to everyone! Finally got to watch this. Sure would like more details on some things but I guess this is a long way back in the rear view mirror. Kyle mentioned a youtube channel but I couldn’t find it. Maybe someone else did. I’m curious about how well that hopper worked. Didn’t seem like enough incline to keep feeding square blocks. Also didn’t understand about the turbo. Wasn’t powered by the engine exhaust and from what I could see was feeding gas from the filter through the cooler to the intake. Seems like the gas coming directly out of the reactor into the filter would have ignited the hay in the filter box. No criticism., just curiosity. Anyway it is the best looking wood gasser I’ve seen. The best part is now I don’t have to watch that show any more.

All things that are confusing in the design was pushed by Jesse himself. The hopper had to be streamlined with the body, fancy rear mounted turbo was a must in his vision. Trust me, Kory and I had long talks and arguments about the turbo, entire gasifier design and more with Jesse. He wanted to beat the speed record so he demanded that a turbo be added (Which would have been fine in the engine bay) But he only wanted it to the rear of the car like the new Corvette. This means that a remote oiling system and reserve tank was hand built and the exhaust to be plumbed. The mixing valve had to be in the rear to achieve any kind of fuel ratio with obviously no success since that design effectively just lengthened the entire intake track by 12 feet. Making adjustments impossible while cranking on startup. Common knowledge states that you can’t have ambient air introduced into a pressurized pipe. Once boost is in effect, you’ll posh woodgas out the mixing valve if it was downstream. To overcome that I disabled the turbo. Not allowing any spool up so we can move the mixing valve up front like a sane Woodgasser would do. As you can see it worked. Had a little mishaps with timing since they didn’t have a timing light but still got it running by ear.
Now, the gasifer itself was completely undersized in every direction other than ash area. Like I said before, it was demanded that the gasifer was to be more form than function. So the outside was limited greatly. The only thing Kory and I had a way with was the air jacket, nozzles, choke plate and reduction tube sizing and construction. Everything else was thrown out. Didn’t have the equipment or materials to make proper ash removal like a cyclone. So we put baffles in the ash area to act as a drop box. YES the filter box caught on fire so I packed it with fine stainless mesh I found in the scrap pile from a previous build of theirs.
The soot problem was at it’s Pinnacle on the first startup and run at the scene before reviving the tools. Obviously no time or give a damn to fix it, we was just happy we accomplished the impossible.
They flew me back to Austin TX twice. First was to rebuild the gasifer and help put the car back together after paint. The plan to finish filming fell thru that weekend. Which was good cause they cut up the mixing valve and screwed up the previous setup so much I couldn’t get it running that weekend. Plus they never supplied me with any wood! I went out and bought the lump charcoal and firewood bundles out of my own cash. Used their bandsaw to process fuel for two days straight

.
Flew back out and spent a week Fine tuning the car, gasifer inspection and clean out. Found the entire feed pipe and intercooler was stopped up with soot. (No surprise) so I washed it all out and installed that fine stainless mesh. Hoping that will get us past a handful of speed runs which it did.
The plastic bilge blowers had melted down the first startup so I hand made a steel blower when I flew back the last time. Fairly proud of it actually lol. Once I got the car to fire off reliably I drove it on the windy back roads. Getting it up to 68mph consistently. Feeling it out and checking the soot problem often. Once it was time we hauled the car to Houston to go to that BBQ cook-off and “fill up”. That little skit was my favorite part of all this. Pushing past a gas station and all that haha. The entire last half of the show was a blast. I’ll post pictures and possibly videos too.
P.S. is there a way to make the photos/videos private and only viewable to premium members?

Just make a new post on the premium side

Thanks for answering all the questions Kyle. As you said, it eventually got working well and it was definitely a winner for looks. I wish someone on Road Kill would build one. I like shows without any added drama and deadlines. Did you really get that whole reactor section fabbed in a day or so? That would have been a prodigious feat. Interested in more information about what you are doing now.

The roadkill guys don’t need drama, when you slap way to good of parts on a junk car and go on a adventure the drama happens naturally, usually to Freiburger haha along with the dirt every day guys. Cletus McFarland as well, and grind hard plumbing. All great entertainment!

Hi guys, when excactly and where was this episode?

I don’t know if this will do you any good. 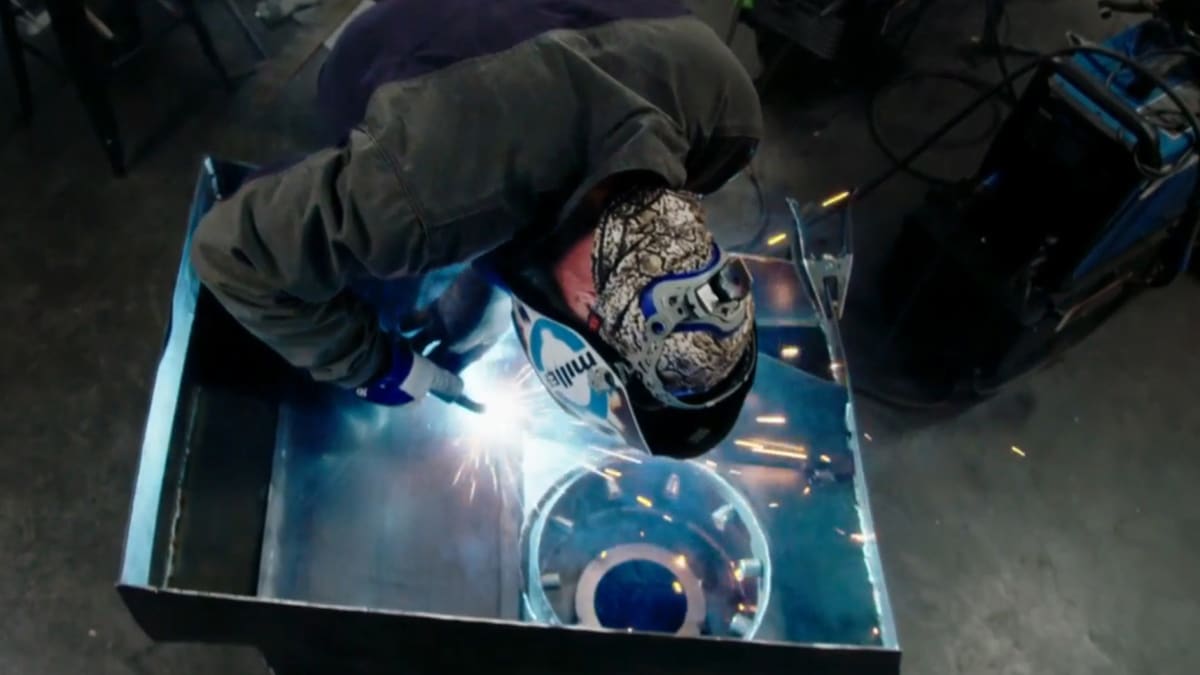 Jesse James and team are building a Corvette that is powered by fire. 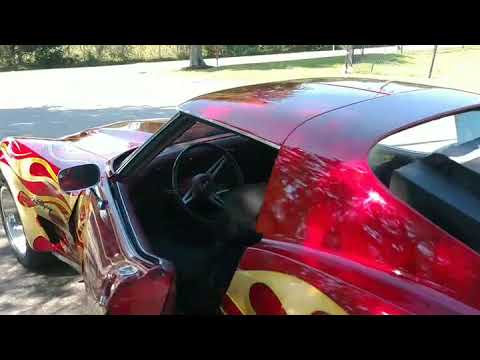 Here’s some pics of the car show earlier today in Austin TX. The gasifier and filter box was built in two days with the help of my twin setting up the onsite plasma CNC table to precut the pieces and mostly cardboard templates. Once we figured out the reaction zone sizing for the “turbo” 350 it was just wrapping steel all around it and plumbing it up. Just forced ourselves to focus mostly on the critical insides then weld the rest around it air tight. Had myself and one other team member welding non stop. As Kory was handing over pieces we kept busting ass. Absolutely no room for any redo’s as anyone could imagine in that kind of time crunch. Every night at the hotel, Kory and I would sketch schematics for the next step for each day. I know that we were the only two people that knew this was damn near impossible being the only ones who ever built let alone heard of a gasifer. So we had to make sure the heart of the unit was not going to deviate. We brought every woodgas literature and book we had in our collection to summon the all mighty Woodgas Gods for a favor.
As for me currently, I’m focused on fixing up my house here in Greensboro, NC to sell. Many things on the back burner but it’ll pay off when I get a house with a pole barn so I can unleash. I’m addicted to woodgas and antique hit-miss engines so I got to treat myself to some dry shop space.
Future plans is to woodgas a late 70’s firebird (has a ring to it right? Lol). But unlike the Corvette I want to take my time and make it perform better with a much more thought out setup. Playful jealousy has boiled up following Jacob by achieving the Holiest of holy driving cross country. So naturally I want to do the same. Very proud of this community and our determination. We are truly a different breed

Who owns the vette now? I know some very good people in your area if you are interested in growing your own food or basic homesteading.