The "What followed me home" thread

David, I must admit that the little truck is on his best profile

If the water used goes back in the ground after the fieild tile, is there any water lost,? Or just talking well pump energy use.?

I think there is no water lost exactly. I guess it costs money to pump water. One bigger issue is that we in America are one of the few places int he world that spends the effort and energy to “purify” all of our water, even what we flush etc., while most people just purify their drinking water etc.

It also makes a statement about general lifestyle differences I think. We are consumers, some would say that we are extremist over consumers. We are using that water to wash things that the others don’t have, or to water lawns so they’ll look pretty, or do other things that many would call vanity.
But then there are a lot of places where there is an abundance of water,…like here. We use it, we spend a small amount of energy moving it, and then it goes back into the cycle with little lost. But if you’re a Mexican in northern Mexico that used to rely on the Colorado River to irrigate your farm, but now the entire river is being pumped to southern California and never reaches your farm anymore, just to water someones flower bed, or wash their 6 cars, or their 12 dogs, you might have a problem with it.

On a similar note, I saw a documentary about how China is totally diverting two of Bangladesh’s biggest rivers before they cross the border. They are basically planning to totally use all the water from two rivers the size of the Ohio and Tennessee Rivers before they get to Bngladesh. No one seems to be real sure what the result will be. I wish I could remember where I saw that so I could try to find a copy. It’s a little hazy in my memory as I think I saw it on tv at a hotel somewhere. …Just an interesting thought…Maybe Bangladesh has enough water to make it work otherwise.

The politics of water. I bet the guys out west could tell some stories about it. Around here it’s about Atlanta taking too much water out of the rivers before they get to Alabama. When I was growing up in Florida it was about the lowering of the aquifer and ruining everyone artesian wells and creating massive sink holes that swallowed acres.

How is that water figured? I am curious. Does it include like water used for energy and food? Or just what a family would use on a daily basis?

Those numbers came from a group called data360 and were verified by several other organizations, though they probably all get them from the same place. As I understand it, it’s not figuring all the water for agriculture and industry, just household use. It wouldn’t be fair to credit one country with the water they use to grow food for the other country, etc.

At first I thought it had to be lop-sided, but it’s not hard to figure if you think about all the ways we use water that folks in Mozambique don’t. washing cars, dishes, laundry, houses, dogs, watering flower beds, etc…My wife is from Houston, TX. When I would visit her there before we married, this country boy couldn’t believe that people actually hose down the sidewalks, driveways and streets after they mow their grass. And her neighbor had sprinklers on the roof to water the roof when the temp got to a certain point. He had figured out that it was cheaper to buy the city’s treated water to cool his house than to buy the electricity to run the air conditioners.

On the other hand, if you don’t have a car, you only have a couple dishes, you have one set of clothes, and you eat all the dogs you can find, there’s not as much call for huge amounts of water.And if you are carrying all the water you use an average of 3.7 miles, you look for reasons not to use any more than youhave to.

We lived in an Amish community for 2 years and had to haul all our water in IBC tanks with horses. I can testify that hauling water will make you stop using it. We lived on 250 gallons a week. That’s 35 gal per day. drinking, bathing, laundry, cooking, watering livestock. You don’t do anything else.

The 7 gallons for a family of 6 in Mozambique is basically drinking and cooking-rice water.

Anyway, sorry to be so long-winded…

How did we get to water usage on the “what followed me Home” thread?

That was my fault i seen billys tank and got started off on this coares subject knowing billy knew his beans on the subject. Sorry about the thread un organizing. Well i did mention the oil well tank my bro used after it followed him home? BBB

That was my fault

And mine too. I don’t use 150 gallons a day unless you count the water used for gas/electric thus the question. I suppose other folks use more.

Got 4 barrels at local aution for 35 bucks out the door 1 mile from my door the ones i bought are 37.5 pounds, not too bad too weld, lot easyer too weld than the 28 pound barrels.

A friend clued me in to a local online auction going on for a 1960 Massey Ferguson 202 Workbull tractor. Its the industrial cousin of the tractor I already have and an easy conversion to run on Woodgas… It has a stock heavy duty loader on the front. She comes home Next tuesday as long as she starts up. Gas engine continental z134. Of course Now I just have to find time to get it running, get it home, convert it, grind charcoal and fire it up… It has lots of potential. 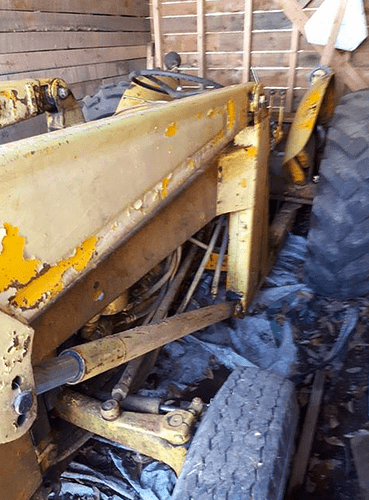 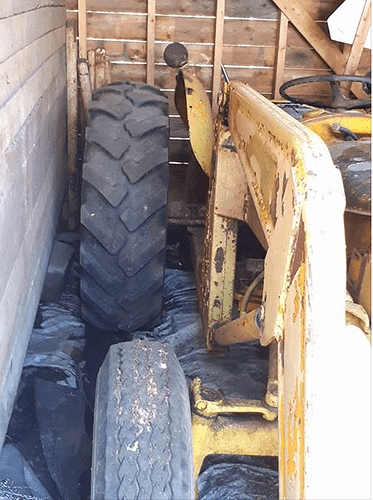 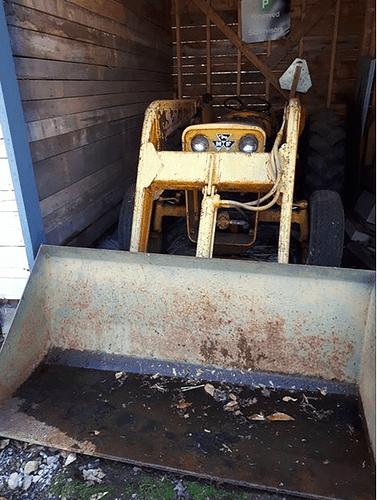 I love those industrial tractors, and those Continentals purr like a kitten. Some of the ID tractors had power shift with forward and backward pedals. That would be sweet if you were doing a lot of loader work!

Nice extended explaination Billy North.
You have to figure though that many here in the good 'ol USA are sick and tired of all of the America-is-the-gorging/hog/pig ruining the Whole world crap. Put boots on foreign soils and maybe some truth to that. Our oh-so wonderful (not) mass-entertainment exporting Industries? Just turn away, stop your whining, and shut them off like we’all true Rural’s here do. Who cares? Why care?

19th and early 20th century it was British Empire culture bashing.
Before that French culture assume-tiveness bashing. Before that Spain resource gorging bashing.
1980’s was Japan-taking-over-the-cultures bashing.
China; you all are up next.

I do greatly resent at a recent take the god children kiddo’s to the Portland Or zoo that they had to walk across molded in concrete graphics showing that THEY, as Americans, were the greatest kill the planet carbons polluters in the whole world. Carbons sucking, carbons spewing, critters killers.
Then the “new” eagles shooters polluters exhibit showing in ballistic gelatin blocks that all rifle shooters were spewing toxic lead particles out into wildlife fleshes that up line feeding was killing off all of the pretty bald eagles. O.K. Non-leads, non-toxic bullets are here, and now possible. But. Won’t be good enough for the Social Progressives. Ever. All-guns-are-bad. American anything/everything is b-a-a-a-d. Everybody knows that (we tell then often enough).

My point. Any: I-know-better-for-others bashing, is always a slippery slope BAD. Won’t just ass bite you. Get you nose punched. Hard. And persistently.

I hear ya Steve.` I just think that to whom much is given, much is required. And we’ve been given a lot.Taken a lot too.

You will need to start a dedicated “project” topic on your Toyota pickup to get your feedback answers.

These HAVE been done before.

thank you Steve
I am going to open a new topic of my truck later. I am currently too busy with my work to start building a new gasifier. I’ll come back to this topic this fall 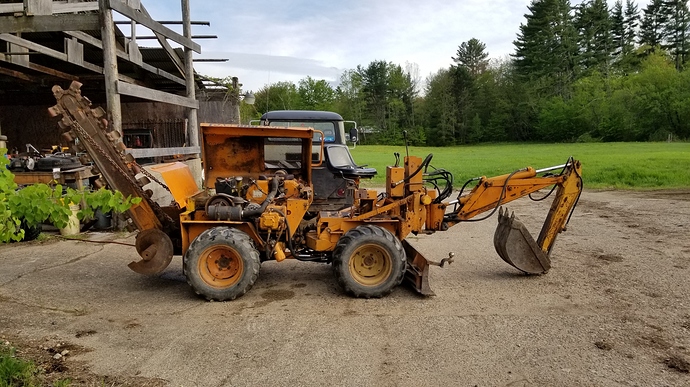 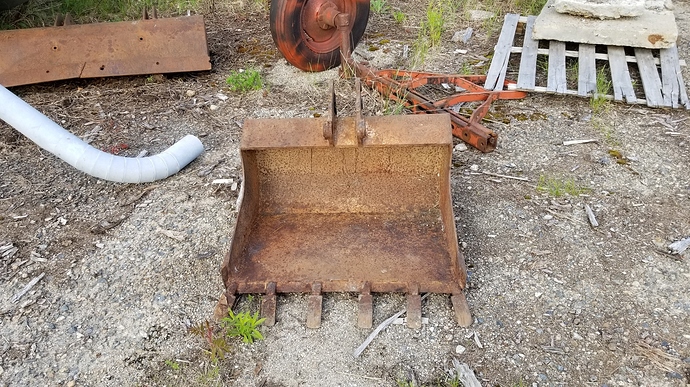 20180520_182729.jpg2015×1133 1.52 MB
Well somehow that trencher backhoe found it’s way into my trailer today. Not sure how that happened as it was 2 hours away from my home in maine… my wallet feels alot lighter too about $3500 lighter. The 3 point hitch backhoes for my tractors where all running about that same price and this is much nicer then one of those and won’t break my other tractors the 3 point hitch ones are known to be really rough on a tractor.
Now I can dig up a bunch of brush which has grown in where I don’t want it and also dig the trenches I need for my solar power lines. I have a feeling it will be a very useful tool around the farm.
11 Likes
mggibb (Michael Gibb) May 21, 2018, 12:39pm #35

That trencher looks like a DO EVERYTHING machine except make coffee 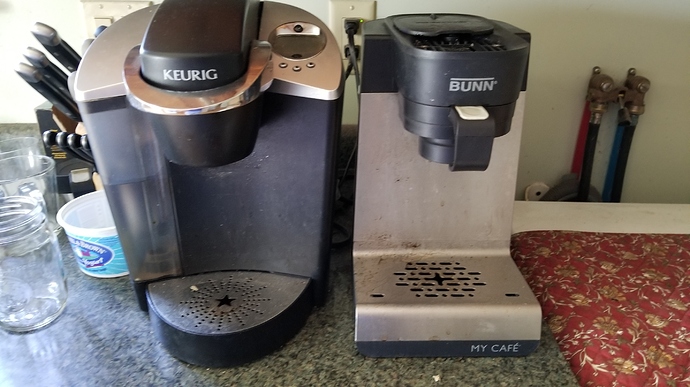 It’s a race then dan. I just put a deposit on a 3 point hitch backhoe that will fit my ferguson. At my speed you have all summer at least​:joy:

Well if you where closer I would let you use it but I think the transportation would be an issue.
Hope your Ferguson holds up to it. Be careful with how big a rock you try to pick. The Ford 600 and 800s are something a friend of mine collects and fixes he finds alot of them cheap because the 3 point hitch backhoes break the rear end casting picking up or trying to pick up big rocks.
I just looked at that photo I should have taken it somewhere else it really shows off the missing end of the barn. The pasquali is sitting under what is left of that roof…

I know of a Massey 65 that was broken into two parts by an overzealous operator.

hopefully no huge rocks. some roots and stumps but no heavy lifting.