Another project. This 16 ft trailer frame will eventually be for hauling steel and other supplies. It needs tires and a floor. But I’ve only got $300 in it so far.

I chose this route over a factory trailer, because its cheaper and more satisfying to roll your own. And I like building things! 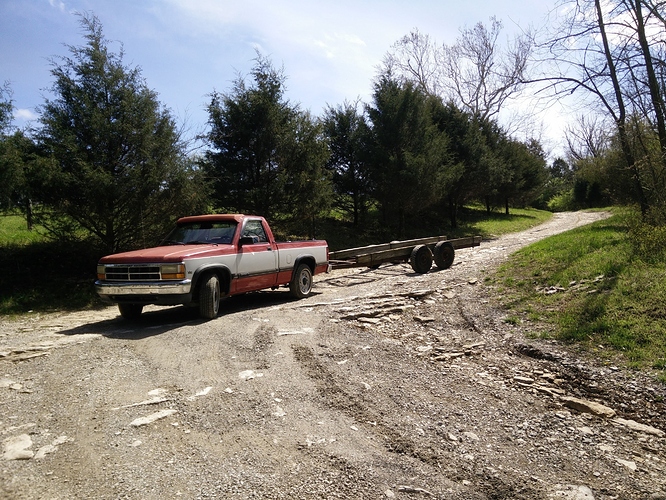 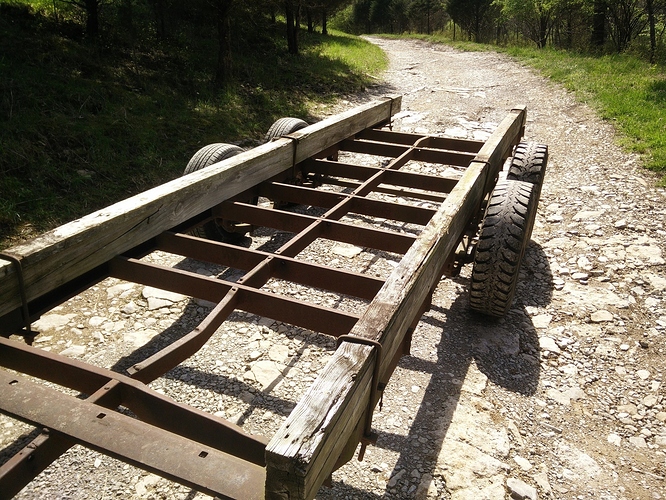 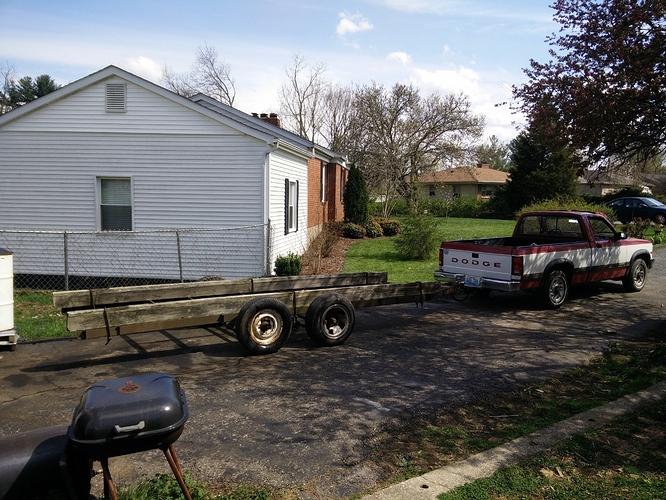 Nice trailer frame… But isn’t the Dakota a little bare in the back?

One thing at a time… Some of the steel this trailer hauls will go into the Dakota’s gasifier.

Is it a trailer house frame? Are you planning to build the floor above tire level? I think back when I built mine enjoyed every minute of it. I also think of things I would do differently

Sorry if I’m out of the loop, but do you own a gasified vehicle currently?

@BrianHWA I do not currently. I have sold the black Dakota, although it’s still here. See thread.

@wobigtd Yes I think it was a camper trailer frame. Pretty light steel, I’m beefing it up some. I was thinking to build the floor directly on the steel frame, between the tires. The frame is 52" wide.

This will mostly haul steel box tubing, sheet metal, plywood, long lumber. Nothing particularly heavy or wide. It is NOT a car hauler and never will be. So lighter is OK in this case (also easier to pull with the Dakota).

What would you do differently?

Brian, I bought the 92 Dakota, and will be picking it up the first part of June. It is different seeing Chris driving on Dino. It almost makes me feel bad I bought the truck. Almost. I feel it giving him some insentive to build a even better one. I’m just going to have wait to get it up here in the great north west to make it a Washingtoneeon truck. It’s going to have to learn to like driving in the cold and snow.
Bob

Chris, looks like you got some dry fuel with the trailer, nice find, keep it lite so you can haul more. Al

Yes, I remember that you’re buying his Dakota/gasifier, but I was just thinking that there was another gasified Dakota in there somewhere.

The biggest one is if the main rails are C channel make sure the lips are facing in towards the center. If not or a box rail weld some bar stock to the inside of them. This will allow you a easy place to hook your tie down straps any where along the trailer except where the wheels are. That area can be compensated for with home made heavy fenders with the idea of hooking straps to them.
Also did you get lucky with the axles having electric brakes on the hubs? I strongly recommend them.
The other thing is I added some reinforcing and should have used lighter material for it. What All said

Also did you get lucky with the axles having electric brakes on the hubs? I strongly recommend them.

The Dakotas can pull a pretty good load. It can’t stop much of one without help.

When he gets there I recommend he uses Carl’s pwm for the fuel pump instead of your brake control. Wouldn’t want him shutting down the engine instead of adjusting the brakes:grin:

That trailer frame looks about like the one i made a light car hauler out of it. it hauled an astro van too the bone yard with out the motor transmision or wheels,up on blocks in order too clear the tires,The police looked at me hesitant,but never pulled me over,as i pulled it behind my geo tracker about 12 miles of back roads,no problems at slower speeds under 40 mph, then again i had the tracker rear frame over beefed up from rebuilding the back frame, it was a hard top anyway.Mine needs a little floor tin or aluminum too keep it light for smaller tow vehicles too.

Thanks guys. Yes it’s C channel, openings face inward, and it’s partly boxed in. I’m going to box the rest of it, then put in some better cross members. I will add plenty of tie points.

It does have electric brakes, however it’s been a long time since they were hooked up. May take some work to get them back online.

Bob, how can you feel bad, I’m the one who sold the truck…

For sure the next one will be even better.

Nice trailer! I recently got a 28 foot frame for $500. I will be beefing mine up to support a tiny house. Your trailer project will probably be finished before mine. Good luck.

Replaced the cross members with box tubing, and boxed the frame in. Replaced the tires and rims. 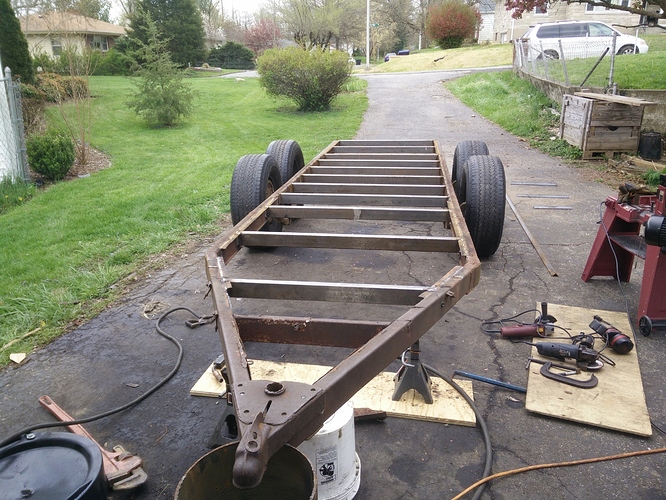 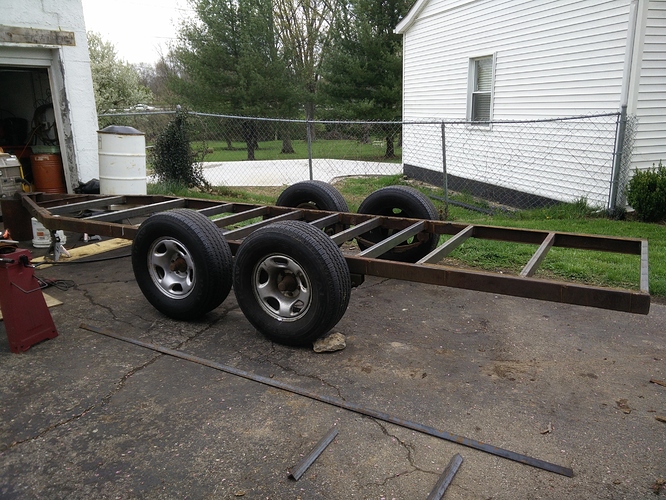 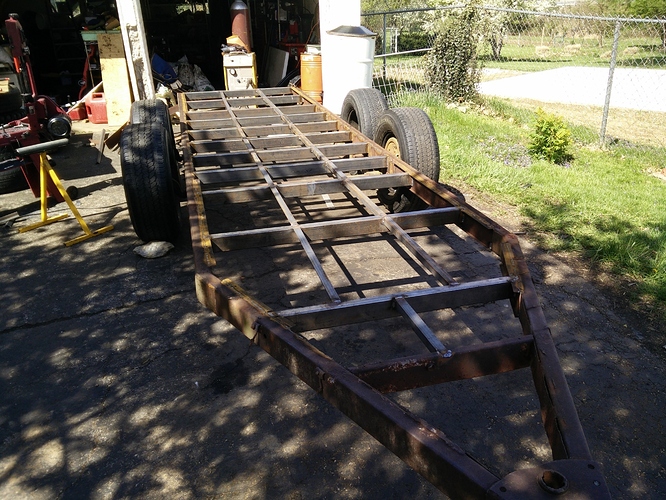 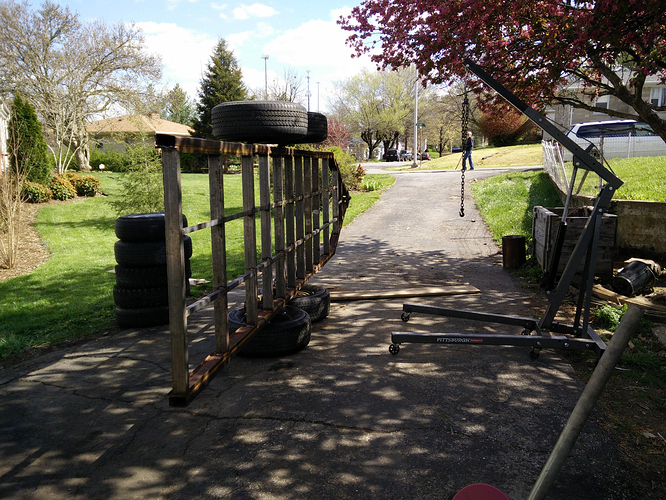 Impressive! Looks like a whole different trailer. Are those Dakota rims? How much do you figure it weighs?

No idea on the weight, but it’s reasonably easy to roll around by hand.

Looks great Chris. I would finish it off with plastic conduit and a junction box for a never shorting system. My trailer was mostly trouble free until the LED lights had to replace the factory ones. Keeps the cops from telling you what’s not working.

Older full size Ford and Dodge share that pattern. May have to be four wheel drive for the hub size.