some pictures of my gasifier construction 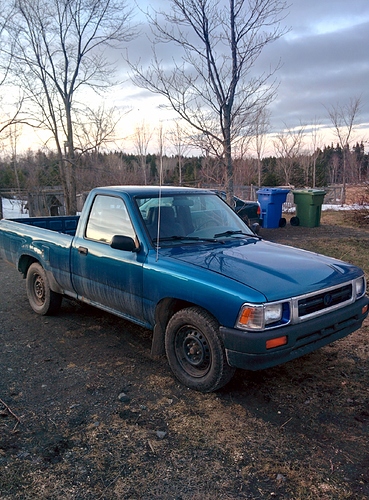 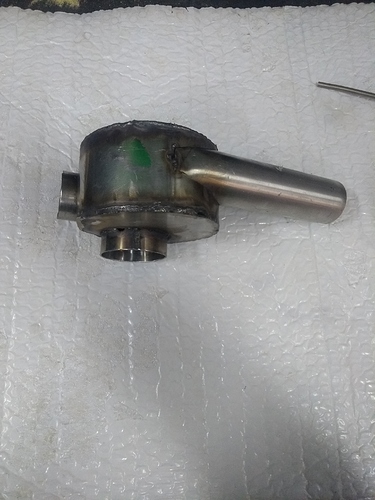 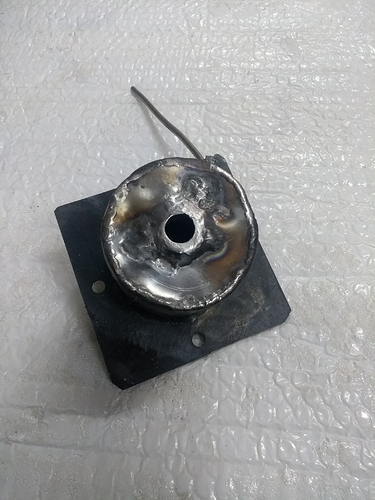 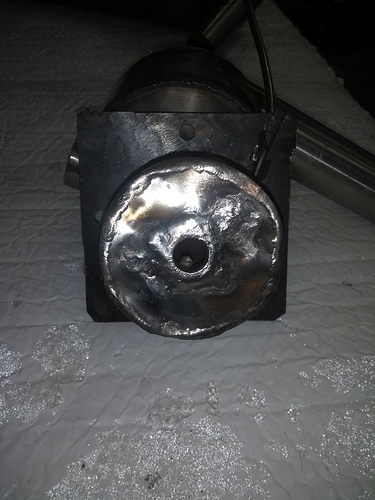 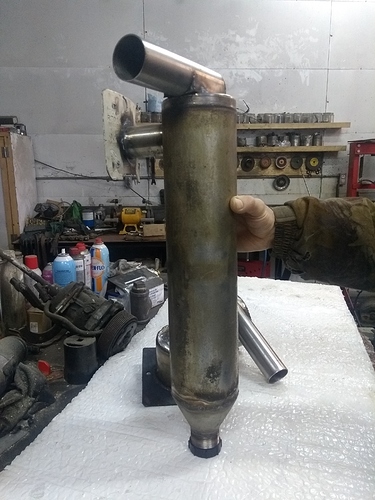 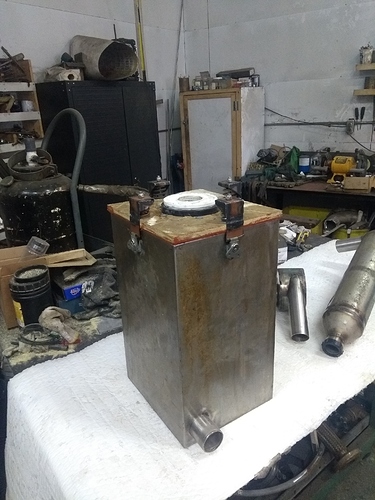 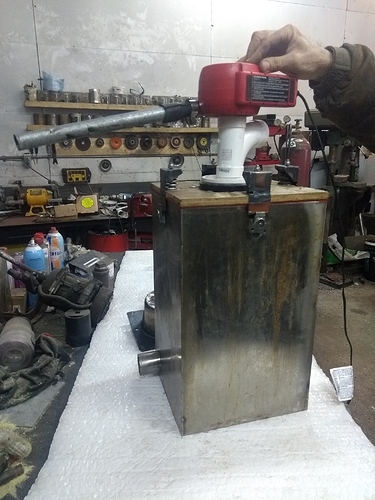 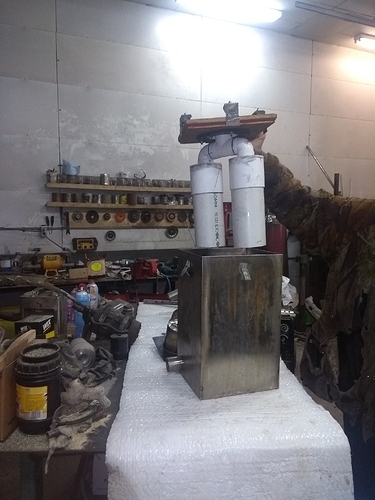 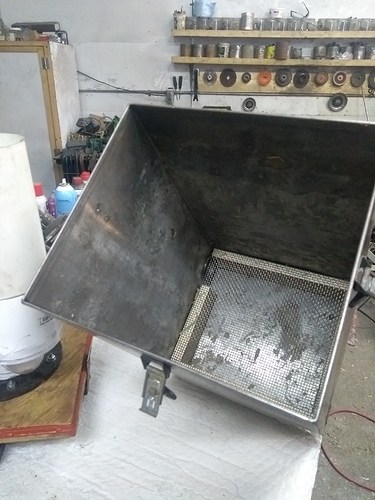 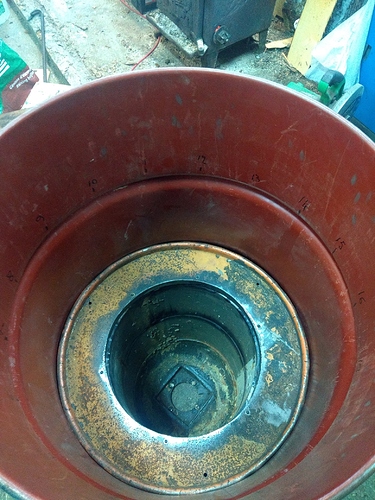 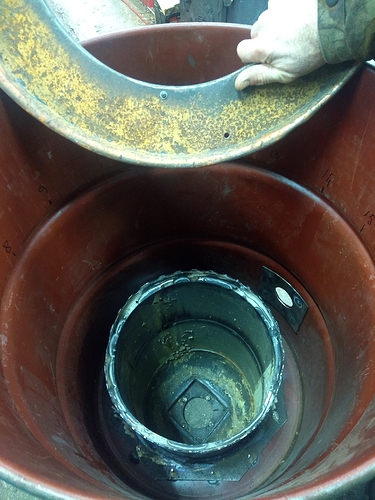 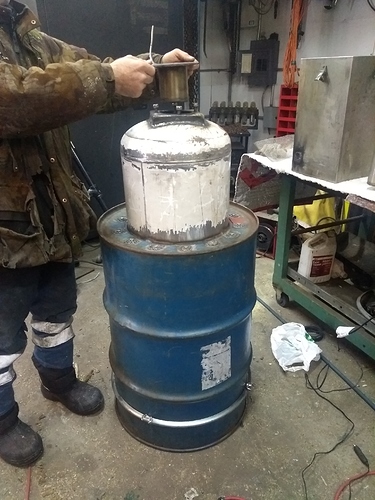 Looking real good Thierry! This will serve you well! With that big of a hopper you will have loads of range!

yes, a barrel of 200 liters, it is not very
inconspicuous

but it’s fast to use. I hope I do not have any problems with road control because of this rustic installation

I had a 93 4WD that I stuffed a small block chevy V8 into. I retained the Toyota 5 speed and kept it all stock. That thing was faaaaaassst!!! and also Scaaarrrry!!! lol

Actually the Chevy small block V8 will fit right in with plenty room to spare. The 4WD vs the 2WD are identical bodies. When I was done with the install that V8 sat in there under the hood looking like it belonged inside there from factory.

There is a company that makes a kit for the Toyota / small block Chevy V8 conversions called Advanced Adapters. It took less than a weekend to install it with the kit.

I later did a Honda Passport V8 conversion that I custom made all the parts for conversion, including an adaptation to mate the stock T case over to a GM 700R4 transmition. The Isuzu V6 used a GM 4L60E; this is basically a modern version of the 700R4 however it had a different bell pattern. But the shaft splines were the same so I just needed an adapter to mate them. 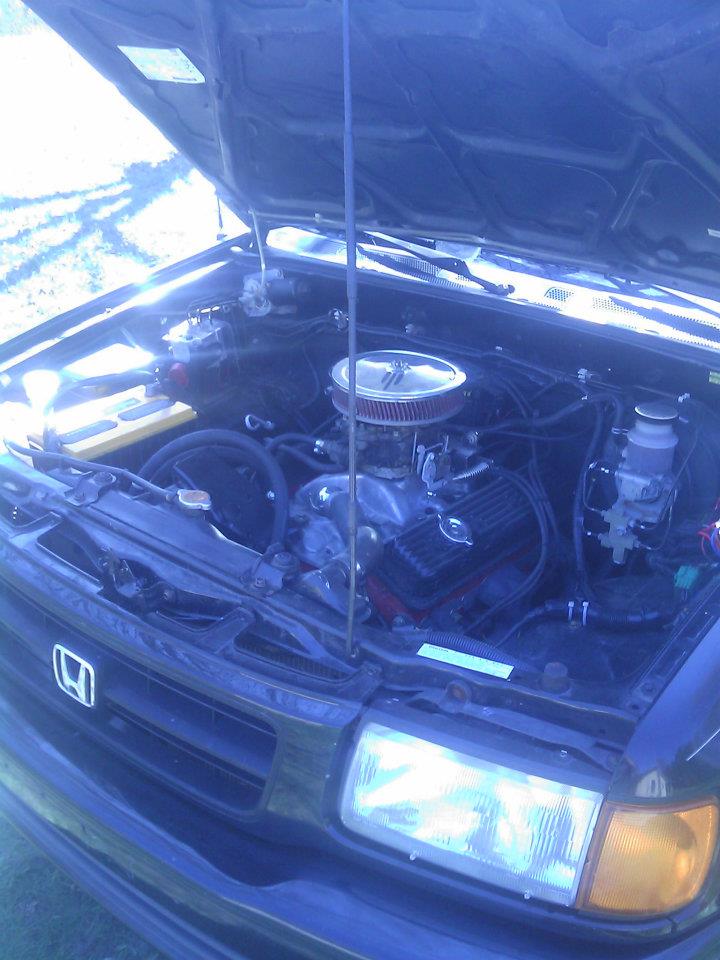 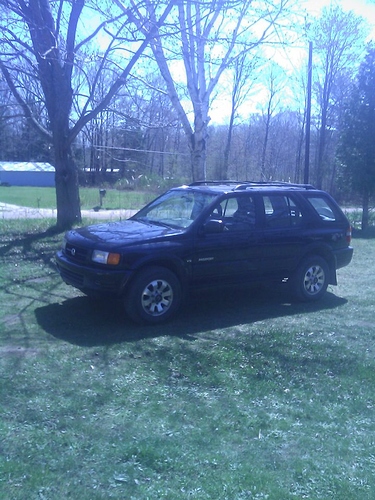 So as you can see I am addicted to stuffing large engines into tiny little trucks!!

So here is my next endeavor, this is an 89 “S-10” Chevy 2WD pick up. I have a 94 Toyota 4WD drive train complete with axles, 5 speed manual transmission and drive shafts. The front axle however is from an early 80’s so it is a solid axle.

The plan is too graph the Toyota drive train under the S10 and get the trans adapter for mating up a Chevy V8. This time around I do plan on an LS based engine; more than likely the 4.8 ltr for better fuel millage… It will still have more than enough power to get me in a lot of trouble

On the Toyota project, I used a 283 CI small block Chevy V8 from a 1966 Chevy Impala SS. I completely rebuilt the engine stock. It was probably pushing around 220 HP. The fuel economy actually went up with the V8. These trucks in the 4WD flavor got around 18 MPG (I dont know what that would be in liters) (In the day that was actually pretty respectable. However with that 283 stuffed under the hood it was getting around 26 MPG on highway and around 22 - 24 MPG in city depending on how much rubber I left behind on the pavement

If my sales continue to go the way they are I hope to get back on this project this spring and yes it will be woodgassed. 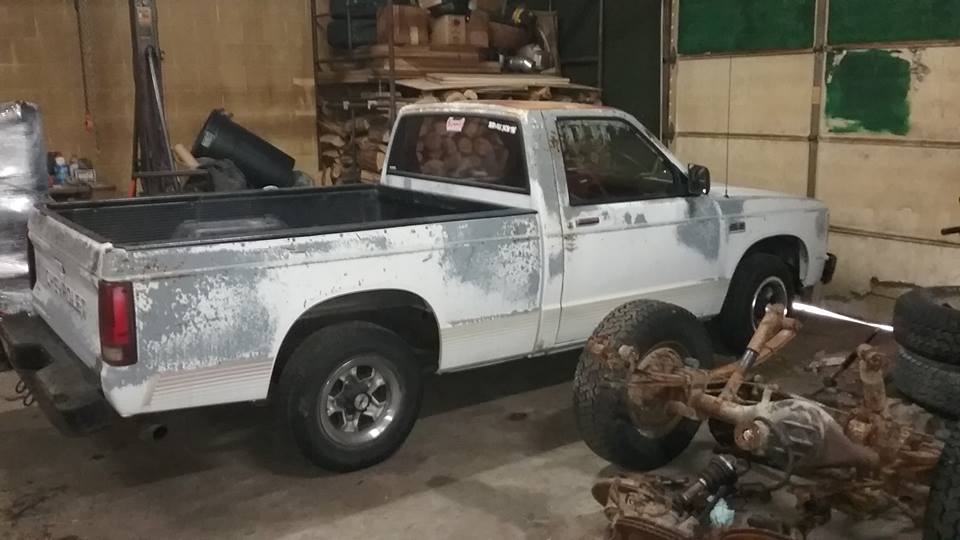 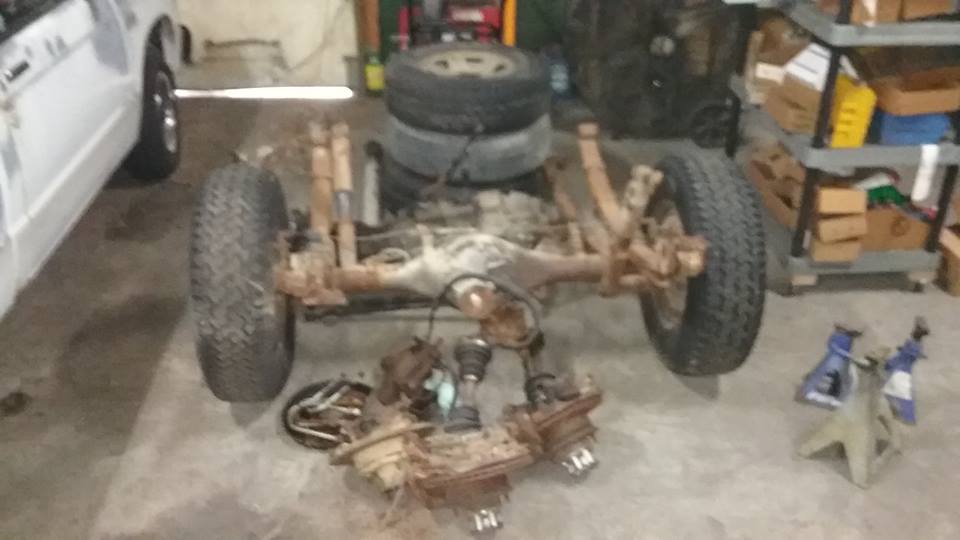 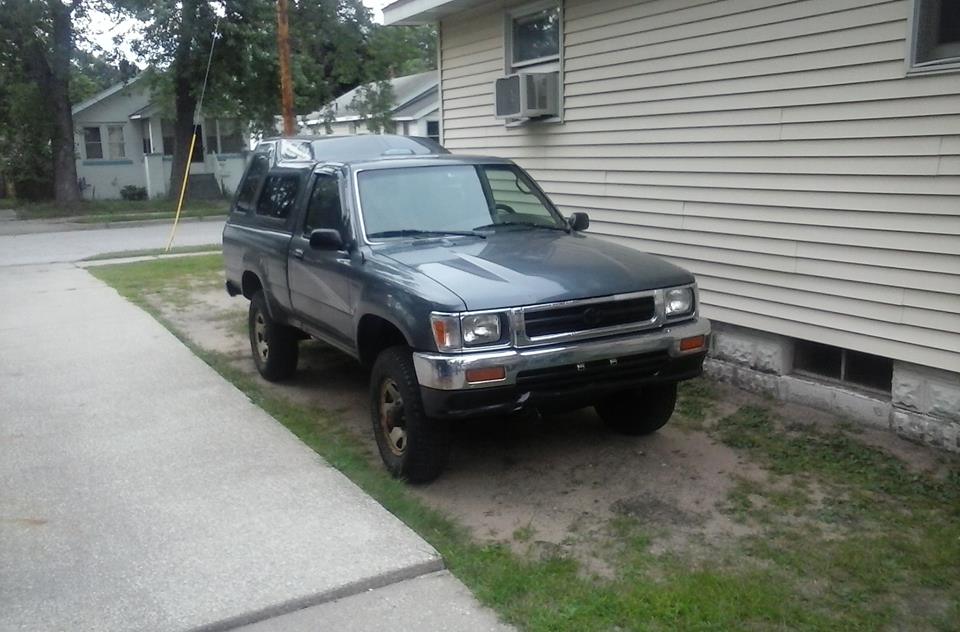 Thierry,
These pictures are so great. I can see the amount of thought that has gone into this project. This looks like a great combination of components. Thank you for sharing!

What Bruce said. Really looking forward to see this rig come together.

Caint wait too see that 355 setting down it your little s10 toyota. I had a 350 in my dodge ram van years ago, and trans, it got better milege than the 305 that i first put in it. I get about 21.5 high way with my 2000 4.3 s10, much better than i ever got with carb vehicle trucks.They all drink more fuel getting warmed up in our nothern mi weather. HWWT. I got too get a wood truck set back up again here.Wont be long and june 1st argos will be here.

I build a gasifier “Gilmore style” for my truck. Currently, the gas comes out of the gasifier by an iron pipe and enters a cyclone
I would like to know if to cut the iron pipe which connects the cyclone to the gasifier to join it by a flexible union in rubber,

I’m afraid the overheating at this place

I did a first test today … and I ask myself some questions
the engine started well but died in slow motion. After a few minutes the engine was alternating with high and low revs (without touching the accelerator)
I think of an air leak … is this your opinion?
I have an oil bath filter and the oil was white right after the test.Is it caused by water in the gas? ?
I do not see any water or ash in the intake pipe

I’ll do some pictures soon

What you describe is a phenomenom wery known to me. Dont wory, its just a minor beginer problem.

What happens is there is only a small glowing area at startup. Engine starts, the air draw is biger, and the gasifier cant keep up. It starts making weak gas. Then rpm falls, air draw decreases and gasifier gives good gas again. Engine revs go up, and story repeats. Then suddenly it starts working fine. Just give it some more time.

What size char do you use? Moisture?

new test today.
first I sifted my coal and examined the nozzle all seems normal, no melted ash and the nozzle seems intact
in the bowl of the cyclone three spoons of water and soot (probably damp coal)
ignition in less than 10 minutes and departure with some hybrid fuel to support the low fuel flow of the gasifier.
Then shut down the fuel pump (100% chargas)
the engine reacts well on the flat ground but no power in the climbs. again need gasoline hybridization in climbs. After 1 mile I try the idle and the engine instantly suffocates (even in hybrid mode, the engine refuses to restart). Then I increase the restriction of my air valve after several attempts to start the engine starts again
Do you think that the low power of the engine is caused solely by the moisture of the charcoal?
the gasifier nozzle is probably a bit narrow (5/8 "+/- 16 mm)
I do not add water yet
my coal is badly calibrated and probably a bit humid (At this time of the year the atmospheric humidity is very strong, I can not condition my coal)

Hi Thierry , just throwing out a few idea’s that you probably have thought about anyway .
am correct you say your nozzle is 16mm ? if so then i would at the very least go to 25mm or even larger for a 2.5 L engine , not so sure that the damp charcoal would cause a major loss of power , i think if its too wet you can normally hear it popping and crackling from the lighting port , also the grading of the charcoal would help a lot if you can get it down to 3/4 downwards to 1/8 in size .
Do you have any timing advance on the engine ? how have you over come the computer engine management system ?
One day i would like to convert my 4 litre hilux 4x4 so i watch this with interest .
Hope you get this running good soon .
Dave

Hi Dave
Thank you for your good advice
my wood thistle is made of finned dry spruce branch. I sift this coal with a griage 1/8 and I manually remove the big pieces.

this truck is from 1993 OBD1
So far, it seems to react weel. I just instalé an interrupter and a PWM, in series, with the gas pump. I can hybridize in this way without difficulty

I do not have a timing adjustment on the engine

I’m probably going to enlarge the nozzle hole. But I only want to change one variable at a time (as Koen recommends)

the engine has no power, no idle

according to you what should I prioritize as a modification on my gasification system?

should I start by enlarging the nozzle?
or adjust the humidity of the coal?
or add the drop of water in the nozzle?
… or something else !
I am a little disconcerted

thank you for your suggestions

Thierry,
I’m sorry, I have little knowlidge of charcoal gasification and very little knowlidge of your current setup.
All I know is air through a small nozzle into pile of dry char should make good enough gas to make an engine run. The tricky part is usually to mix the right amount of air into into the motor. A restrictive system makes it even harder. Could be part of the problem.
You mentioned condensation in the cyclone. Could be the char is a bit moist. No need then to start experimenting with waterdrip just yet. From what I understand that’s only to cool the reaction and boost power (fine tuning).
Try find out what kind of vacuum you’re pulling and try dry char to start with. That’s about what I can come up with.
If we get to know a little bit more about your system I’m sure some experienced charcoalers can chime in. Dave gave good suggestions, but we know too little about your setup to give more advice.