Time to open a nother topic

The vehicle in question is this one 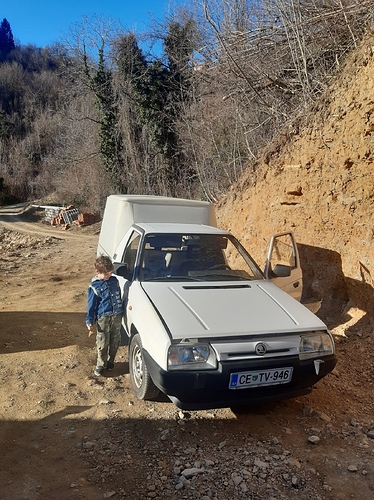 A 93 škoda, 1.3l carburated engine. Pushrod OHV. 57hp. Not the first choice for woodgas but suitible trucks here are about as common as a honest politician. The truck is light thugh so the power is good on dino.

I will post detailed pictures later but for now, l can say l love it already

everything is so simple and mechanical. And SPACEOUS!!

I did some investigation yesterday. The fuel guage float was stuck, fixed now. I changed the antifreeze since it looked bad and watery, added some oil.
There is a leak in the brake amplifyer, wich makes it idle rough (one cyl is lean). I culdnt find where the problem is.

The carb is a double barrel style. Metalic intake manifold.

In any case l will filter the gas free of any soot and continue practicing the wood/char mix feedstock to achive perfectly dry gas so sooting the carb is not a problem. Hybriding might be.

I have 3 options here:

As for the woodgas part, l will be runing my modifyed hevy duty 7" wk from my Mercedes. Thats the easy part

If you setup the carb like you suggested in the 3rd option you will have to start on wood gas not start on dino and switch over. I had thought about that with a tractor to keep the govenor working.

Well @JO_Olsson reports hr does this 99% of the time anyway. Start on gas from the last run.

Question. Is runing a dry carb harmfull in any way? There are membranes and stuff in…

Is runing a dry carb harmfull in any way?

I don’t recall any issues with the carb dry .

I have had good success running engines on Japanese electric fuel pumps. These I took from Ford Courier / Mazda trucks, 1984 or earlier, the pump is mounted on the frame behind the cab, driver’s side. Held on by 2 rubber isolated mounts. I even used one to supply a Ford 351, it worked for normal driving situations.

I have had good luck with these.

Then add a small carb over it, in the woodgas suply pipe. This small carb gets activated only when the original carb is WOT,

Even better if you could find a mpfi intake (incl tb), for that type motor. Should be plenty in junk yards.
With the setup you described you would then need only your stock carb and petrol supply.
The cable slack (hybrid adjustment) between the tb and the carb could easily be controlled from cockpit.

The carb has 2 barrels that move independantly. The first barrel is the main one, second opens if the pedal is all the way down. I was thinking l could isolate the two and screw in plugged jets on the main venturi. That way no petrol wuld flow in the first barrel and it culd be used as a woodgas TB. If hybriding is required, a furter push on the pedal wuld open a second barrel.

I think your idea is good. But if your carburetor is zinc it will corrode. And if you change the existing carburator it will be harder to return the truck to it’s original condition so it will be harder to sell if you have to. I remember you know how to melt aluminum so I think it would be better for you to make your own special carburetor. This is more work but it will make much more value.
Rindert

Good Morning KristijanL.
You might want to review my topic. “Open Letter Apology to Mother Earth News”.
They evolved to primary and secondary staged carburetor splitting for their 454 V-8 and smaller inline engines.
It worked.
Bare in mind that this was for an acceptable engine loss of 30-40% power for them.
Takes the right design carburetor to achieve the internal and external separation.
And takes a become good carburetor man to do the conversion changing over.

For your least power reduction loss on your small engine I’d think you need to go separated; optimized for each fuel. Put your development work into the change-over control systems.
Ha! And Wifie operator training.

Regards
Steve unruh
And yes the actual carbs metal to wet woodgas might be a long term use problem.

I really like the cars of Eastern Europe for their simplicity and their ease of maintenance.
why not choose a primitive injection engine (OBD1)?

If the the two carburettor barrels happen to be equal in diameter, I can present an idea of using it beneficially for woodgas metering 1:1 and using one of them for occasional gasoline use… Check for eventual inserts which could be removed…

JO, l think l know what you mean but am not sure. Culd you skech your idea?

Well corrosion can only happen if there is moisture present. With the latest sistem l run on my MB the gas was dry so corrosion doesent worry me that much. Althugh l am concidering building a simple carb for hybriding. Doesent need to be precise at all since it can be manualy adjusted later on with the air seting valve.

Max, no, the original flaps are different in size.

Thierry, thats the problem. There are none. Been looking for a better candidate for years. All l kept finding was looking like this 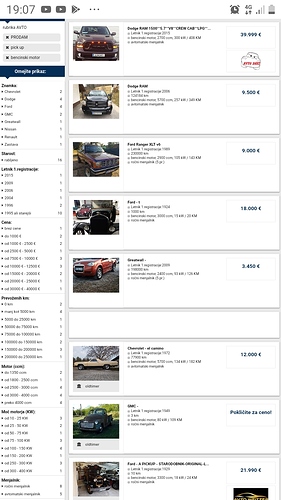 I so love the old 30s and 40s body styles but I would want a much more modern driveline and suspension.
That truck you got looks like a bargain to me. Reminds me of my first truck a Dodge Ram 50 I loved that small truck you could park it anywhere.

Chris has made a video of it in “plastic form”.

Max, l do not want to modify this engine too much, first of all l am wery time limited lately with fixing our new homestead and second, the car still needs to pass inspection.

I learned something today. This Škoda is without a dubt THE worst car l ever driven in snow. Probably because its so light. Less thain 2" of snow fell today and l ended in a ditch driveing like 2mph. Hope nothing got damaged.
This probably wuldnt of happen if l left the wood l sawed on the truck bed. Making some sawdust lately!

Hi, Kristian!
26.2.2020
Using studded winter tires helps you to keep on the road. Here they are obligatory from december through march, and allowed from november through april.

Hi KristijanL.
I pulled up pictures of your installed engine. And it’s 28mmx30mm Jikov carburator.

I had been going to say make up a separate steel tube intake manifold for woodgas. Keep the stock one - stock for testing/certifying day.
But it is installed on the inside between the engine and the firewall. Lower edge bolts no doubt only accessible from the bottom-up!
I actually did this once on a first generation VW Rabbit (Golf).
I had the stock aluminum manifold and single barrel downdraft Solex.
Had a made-by-me tube steel manifold with dual British SU sidedraft carburetors.
Then later even set a 3rd manifold with sidedraft Webers.
I was young then, and into sneaky street sleeper-cars.
My zip on/off quick trick was to use LONG lower bolts with sleeves so I could stand above access.

Ha! By the way, the factory heated Solex was the way to go in the cool/wet and winter cold.

Winter driving a FWD you want the best of winter tires. And on a rear load bed model have a sand-tube plastic trough bolted above the front bumper. Transfer that sand-bag weight front to back as needed.