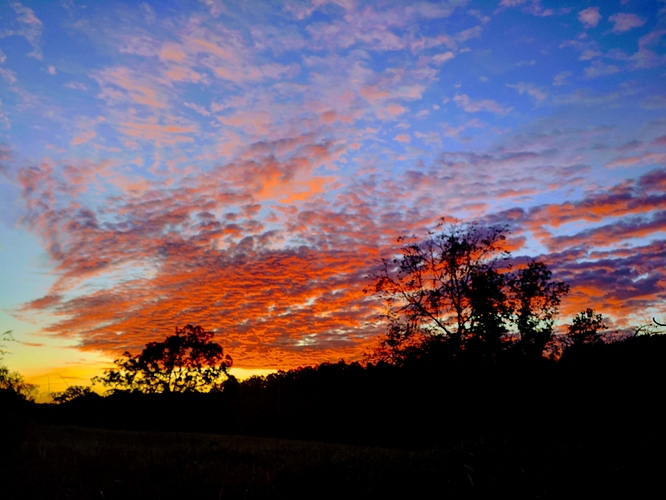 Continuing the discussion from Life goes on - Summer 2017

Took this on my way to work the other day.

Okay that is acceptable picture, just no white out blizzard pictures.
Bob

Took this on my way to work the other day

What is keeping you busy these days? You are not doing the store stuff anymore are you?

I’m working for a company here local called Earth Tools, we sell and service walk behind tractors and implements, along with pro-quality gardening tools. We’re the top distributor in the US for this type of machine.

I’m the “office manager” which includes being the bookkeeper, website/IT guy, occasional electrician, plus I hang around the fab shop a bit (we make some of the implements in-house). 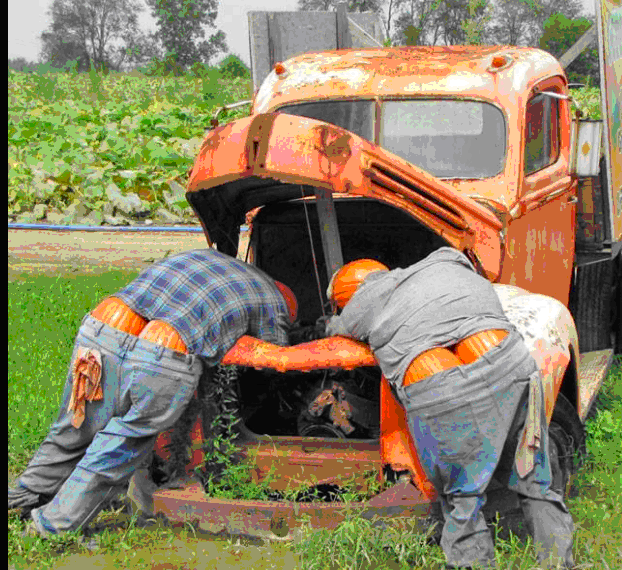 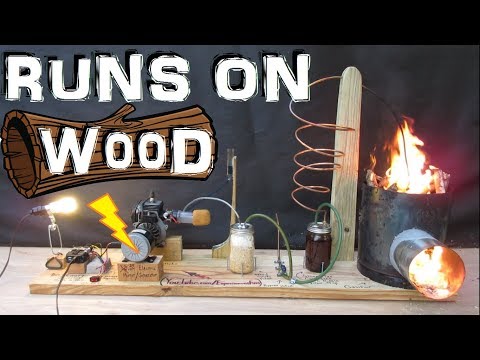 OK. I spoke too soon about the winter thing yesterday. Turns out we’re going to get an early frost tonight. So now I feel sorry for myself as well as you guys up there.
So we just went out and cut most of the peppers and brought them in the house to strip tomorrow. Covered some more just in case they pull through.
Filled up the dining room pretty well.
82 degrees yesterday/33 degrees today. 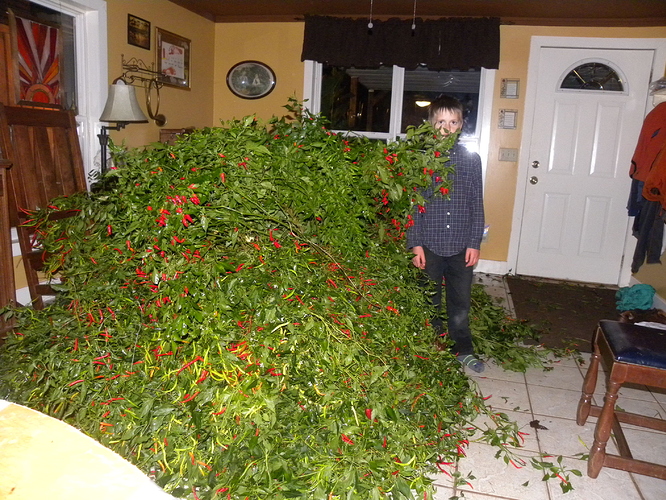 Had a crow show up this week. Tame as anything you ever saw. Just flies around, comes back. Disappeared today with the cold rainy weather. We’ll see if he returns after the cold spell. 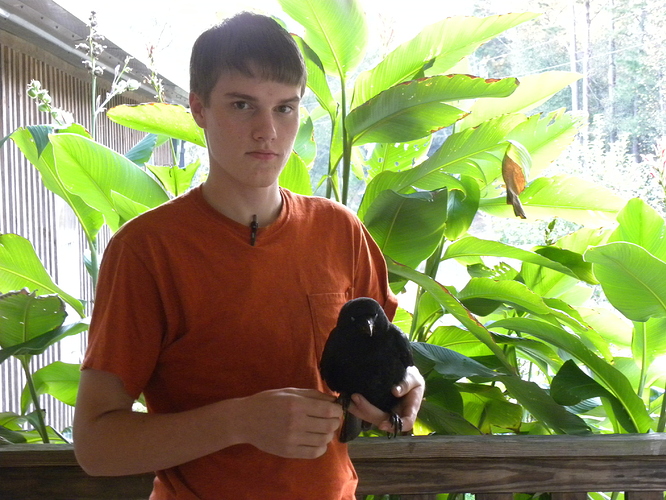 I spoke too soon about the winter thing yesterday.

See, too soon and too loud. That’s what happens - frost bites you in the butt

See, too soon and too loud. That’s what happens - frost bites you in the butt

To be sure. Home from church meeting now and we’ll spend a little while picking peppers in front of the stoves. It doesn’t take that long when you have several hands at it.

update: It took about 2.5 hours and yielded 30 gallons of peppers. Made a good time to visit and plan together. Then we put the plants through a customer’s chipper I have here in the shop so we can put them in Luke’s bio-gas tank.

Also, helpful tip. Many already know this, but if you have a large volume of plant matter to process like that (pea shelling, etc) if you throw it all on the floor and sweep it around a bit it tends to pick up all the dust. Floors shine better after a good pea shelling, or in this case, a pepper strippin’.

Well having a glorious Autumn/Fall here. 6-12" of raining in Oct. Enough to re-green things back up. Good hard changing frosts more often than not, making for an excellent leaf turning and slow falling. Wood smoke smell in the air every night now. Nostalgic.
Last of the grapes sweeten up with frosting. Ha! Has made a difference in the parsnips.
We took one of the two god-child girls on the local 'ol steam train for it’s annual headless horseman ride.
She loved it. 300 foot dark rail tunnel, high over the river trussel; the horse and rider pictures posing too.
Regards to all
tree-farmer Steve unruh

Pierre,
I like his style and determination. I have not yet watched his follow up videos, but I hope he explains more about what is going on here. He did several things missed by the typical click bait channel: He used the generator as a starter motor. He is cooling and filtering the gas so you can see the tars and junk. He is making good charcoal if he sticks with it. He is running a 2-stroke engine on wood-gas. I know Koen and Kristijan have done that but it is rare.
Thanks for posting!

Also Michael, if he just used the sticks and no sawdust.

And visualize the gooey mess of soot and oil building inside the ball bearings on the crankshaft.
Maybe with perfect filtering, but I have seen tar make its way through paper filter

Just got my power back after 16 hours of outage. But I was all set I hooked up the generator and was able to power the freezer which is full of my beef and garden vegetables. It would have been bad if I didn’t have the generator. The flood was about the biggest I have seen. Here are a couple of photos including inside one of my barns that the basement floods in. 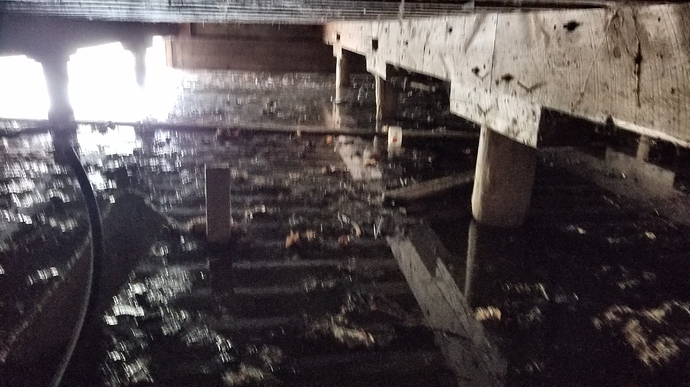 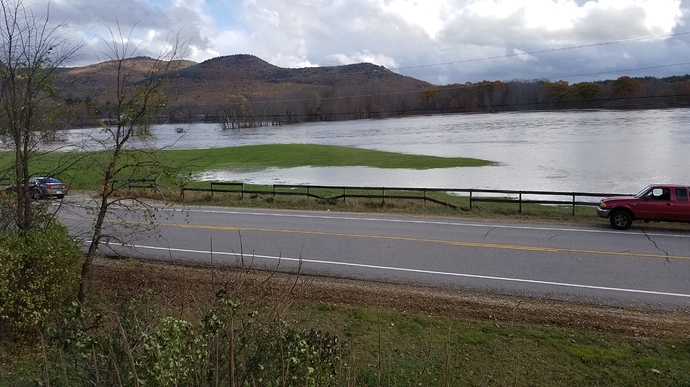 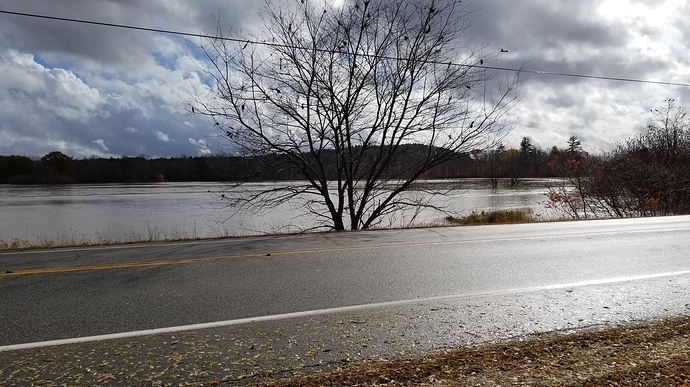 I like the harvest!
We had a crow like that when l was a kid too. I found him young injured on the ground under the nest and he stayed with us a long time. I have a picture somewhere of our dog with a cat on his back, a crow on the cat and a hamster on dogs head

Are those cardamom plants behind your son?

My condolences DanA
My push on the “like” button was for your stick-to-itness.
“And this too shall pass”
tree-farmer Steve unruh

Thanks Steve. There was nothing in the bottom of that barn and I got all my equipment out of the fields before the flood came so I just have to clean up the mess the flood washed in. I knew that barn floods so I don’t use the basement. The top is full of hay right above that timber in the photo but the hay is dry and ok.
I spent the day helping clean up the neighors equipment which did go under in the flood. He is on the other side of the brook that flooded across the road and by the time I found out he wasn’t home and his equipment was down there it was too late. I think his tractors will be ok though because we got to them before he tried to start them up.

I have been real busy and putting a lot miles of the ole wood burners . They are running good. 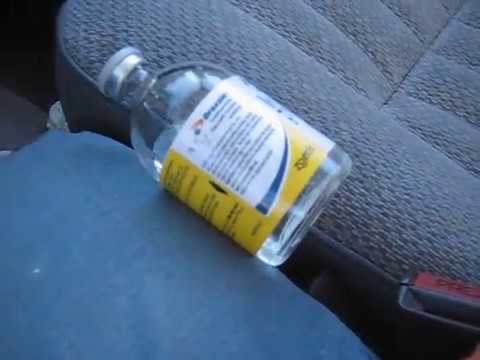