Hello fellow small engine enthusiasts,
I included my conversation with MP as a learning lesson with a humorous duh moment I thought would invoke a few nodding smiles. I know I did. Wife and I got a laugh out of it ,too.

> I finally ran an ICE successfully(sort of). A milestone for me and I’m
> more encouraged than ever! Don’t give up no matter how slow your
> progress is, it will happen. Thanks to all who have offered help and
> words of encouragement, you are greatly appreciated. I’m starting a
> new 10.75" fan with the same motor. I never thought my fan would shut
> me down. Details, details, details this was an oh XXXX moment, but I’m
> really psyched now! Enjoy, Pepe
> 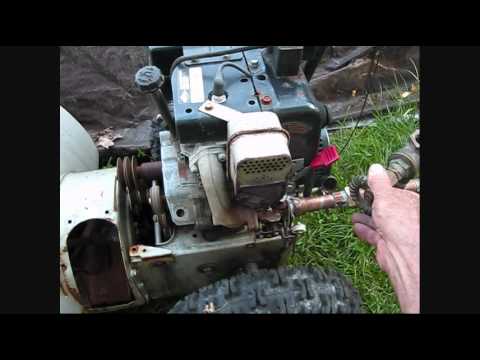 Congrats, PePe! Say, pardon my ignorance if you’ve already gone over
this (or I haven’t looked at all the pics), but the mixer valve near the
engine appears to be flowing gas out, rather than sucking air in, while
the engine is running. In many setups this valve serves as a flare valve
while the fan is running prior to startup (positive pressure), then
reverts to an air supply valve (negative pressure) once the engine is
running and the fan is shut off. (Terry’s riding mower is a good
example, or Gary Gilmore’s generator). But I take it you are pushing
woodgas - plus air - to the motor, the air coming from leaks in the line
or another air mixer valve? This would be why gas is coming out of this
valve during the run?

Hi MP, Thanks and as soon as I read your comment I realized in my enthusiasm to hear it fire up I completely forgot to shut off the elec fan. I did wonder strongly why it was puffing smoke, lol. My thought then was that too much gas was being pushed through and blew back here. Still not a thought of just letting the engine pull its own.
Wait until I tell my wife, we’ll get a good laugh out of it.
Thanks so much for your comment, it certainly clears up a couple of issues. I do like the idea of using that valve for the flare. The swirl burner is cool to watch with friends and grand kids, but cumbersome in the overall scheme.
One cool thing that happened was when I put my torch to the exhaust, it popped off every other time the smoke puffed out of the carb. Ahh, the pieces start to fall together. Left the fan on, I still can’t believe it. lol.
Pepe Congratulations on your first run!!

Congratulations Pepe! My first time felt like magic, like it couldn’t be happening.
Looking at your video, I believe you need a mixing chamber. With the single cylinders the intake pulses need to be smoothed out. A longer or larger tube from air valve to motor could also work. MP kind of touched on this, but I thought it needed clarification.
Terry

yeah Pepe before I did any thing with producer gas, I played around with the HHO devises and built some pretty efficiant stuff. Then after I built my first gasifier and ran that tractor all that stuff went striaght to the garbage. LOL I have one cell that Im keeping to be used as a torch and launching hho over water rockets.

Now that I have my tractor up and running Im having a blast mowing the lawn. lol I laugh the whole time Im driving that thing around the majic never goes away.

Howdy Matt,
I also made a HHO cell back when it was cool. Never got around to trying it on an engine, but I sure had fun blowing up stuff. 2 liter soda bottles made pretty good rockets. Strangely enough the loudest bang I had was with a paper cup. No energy was applied to propulsion, it went all to displacing air.

I agree completely about the lawn. I used to hate mowing. Since being gasified, I had to increase my lawn!!
T

Great job of persevering through it all Pepe!
Yep, you hooked now for sure and have something understandable to show to others. Flare staring is . . . well, boring pretty fast.
Thanks for the still picture - three days now without a good enough line for video.

Small engine mixing: long piping needed as many have said now to dampen out the severe single cylinder pulse. These seem to be a fixed speed dependent tuned design.
Or; fuel gas and air into almost any square, rounded carburator mounted chamber (an original metal air cleaner housing) works well as long as the entry points and mixed exit points are not across from each other. Ha! Ha! I call these type “Wayne Kieths”. Less power power, but better speed changing flexibility.

Fuel gas blowings is OK too if you have a blower fan that can support it on a continuous basis.
Engine woodfuel/reactor sucking you have to control the air side for starting up and power load changes.
Blowing delivered woodgas in my experience you also then have to be able to trottle the gas supply side especially at starting up and idle to provent fuel gas flooding from exculding the air in. Best potential power but gets much trickier to control the AF’s.

Best Regards: AND NOW DO NOT IMPROVE/CHANGE ANYTHING UNTILL YOU HAVE LOGGED AT LEAST 10 HOURS IN A MIN OF FIVE RUNS TRING ALL POSSIBLE OPERATING AND FUELING VARIATIONS. Ha! Ha! Only pull down after you absolutely cannot make it engine power anymore. More to learn this way.

Thanks to all for the congrats and other comments. MP for pointing out fan interference on start of engine ( my duh moment,lol). Wbaker, fan on(backfire), fan off. Lots of fun, anyway. Terry, mixture chamber/reconfiguration, etc definitely on the table. Matt’s first run memory, SU, the throttling will be a challenge, can’t wait to finish my new 10.75" D fan, and for Wayne K, yes, and “line and sinker” too, right up to the ferrule and part 1 ( compliments of my brother “Skip”).
This is such a positive environment, a real pleasure to be in your company.
Pepe

Pepe & gang, Now you know why I came up with that SWEM thing years ago. I still find it hard to believe it at times when the truck keeps on going when all the switches are turned off, even after thousands of miles of it. I have trouble not laughing when I drive at times. Oh well. I hope I can find time to get the piping done on this 97 cavalier so I can see what it will do on the trailer … I’m looking forward to running the diagnostic unit with it while running on woodgas to see what numbers it throws out … It’s in the 90’s here right now so it will wait a few. I just hope the local store has enough sweep 45’s to get me going … May make the butterfly tonight. … Mike L

Hi Everyone, I’ve repaired my blower/fan and implemented the changes in the fuel/air mixture plumbing as some members suggested. The rain has stopped so I plan on firing this baby up again today to test the changes. Fan on, fan off!!! lol. Thanks to all for the suggestions.
I left the flange on the RTV for 2+ days. I stuck a screwdriver between the plates and twisted it and the flange popped right off. I will flare at the valve as suggested. Can’t wait to try this again.
Pepe

I know i’ve made my share of ooopsy type moments… usually in front of people.

Arvid, I can relate to that. I’ve told several folks I would have them over for a demo of the gasifier running an ICE, but anxious as I am, I’m glad I’m waiting for the bugs to be worked out Pepe

Ha! Ha! Yes Pepe and ArvidO. People and thier camera’s!!
All of those VictoryShop videos with invited visitor people ( many having driven or flown in at thier own expense) were live developments with something just being tried fresh off of BenP’s welding table or my fab/assembly bench. Some successes; some pretty big “Booms!” but goal was never ever to have a dud event. Always took having a presentation Plan A, Plan B and even a Plan C. It was after going through all plans that I/we ran raw uncooled woodgas into my 94 Ford 5.0L pick up so they could hear an engine running on woodgas even if poorly at an idle only.
His earlier educational “White Jacket” educational videos were scripted monologues. It was after the University of Florida unit shipped and was ran in then with feedback he thankfully went to his everyday wear black tee-shirt or everyday, cold, opened up shop welder clothes.
Still, always, I was dodging his or some visitors cameras.
And I ALWAYS kept a live presentation Plan D in my own hip pocket. My poor little mini-van packed around at least 800-1000 pounds of back-up tools, fuels and materials in for 2+ years.

we’ve always used a shop vac as an vacuum source when starting. Can’t say i’ve had it go into jet engine mode but i have had a few pops along the way. turn the vac off before closing the valve it’s attached too seems to alleviate that, doing the opposite can be interesting.

more than once i’ve almost pulled my hair out trying to figure out why i couldn’t get it to flare, it’s always turned out to be an air leak somewhere before the flaring tool as opposed to the gasifier making good gas.

we live we learn. if you’re not making a few mistakes you’re probably not doing anything… a fellow (was my boss at the time) once told me that… so i’ve always tried to make my share

Good work on the ICE run . I have a snowblower that I damaged a couple of seasons ago. Making me think about it…

Make sure you are not using the gas can to hold your flare as shown in the photo ! Big potential for fireworks as you probably know.
That flare pipe should get hot enough to melt plastic a foot away.

Hi Gary, The green can is a potable water jug, but no matter , it would melt too! Luckily it’s just the handiest thing I had of that height to hold things in place. It’s important for us all to be keenly aware of gasoline as we tool around the shop and to alert others of the potential that they were “going to move” after whatever.
My motor has electric start, a biggy to save the cranking arm, although I’ve seen some hand pullers start rather easily. You need a motor to experiment with and it’s a lot of fun, too, to finally run on wood gas.
I put my next run off til tomorrow, got side tracked with fencing today. Hope to post another vid real soon.
Thanks for commenting.
Pepe

I implemented a few piping changes suggested by members here and had a more successful run on my ICE. Here’s the link. Enjoy, Pepe.
I don’t know what that odd sound is in the video, it wasn’t there in real life. My wife’s camera outputs MOV files and the new editing program for them, uhh, well, ummm ain’t as user friendly as the old windows movie maker. I’m going back to the older camera, the editing is so intuitive. 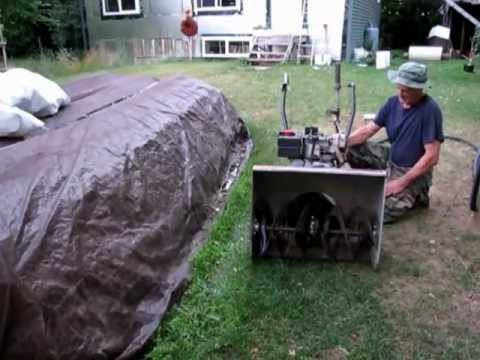 I can’t seem to post the pics I took with my wife’s camera??? Will try a short vid clip tomorrow.

Good job Pepe! Now put it all on a trailer so you can ride around the yard.

Oh, your pics might be too big. Need to make smaller versions before uploading, 16 MB max.